SUNY Canton was featured in an ESPN article for launching varsity eSports.

In early December, the college announced it would begin competing in League of Legends, Hearthstone and Overwatch nationally for the spring 2018 semester. SUNY Canton is the first college in New York to join the National Association of Collegiate Esports (NACE) and plans to compete with about 40 other colleges and universities. 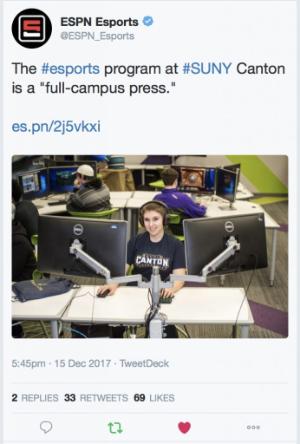 Following several mentions in the regional media, including the Watertown Daily Times and WWNYTV 7 News, the college was contacted by Sean P. Morrison, associate editor from ESPN eSports to discuss the budding program.

“From a residence hall that caters to eSports enthusiasts to a competitive space on campus and including its online students in potential rosters, SUNY Canton plans to take a holistic approach to incorporating gaming into the university,” Morrison wrote after conversations with SUNY Canton President Zvi Szafran, eSports Coach Robert J. Snow and Overwatch Team Captain Emily A. Oeser.

"We want our online students to be totally integrated into the life of the college," Szafran said during his interview. "eSports, in one sense, is a way of giving an applied thing to some of our academic programs. eSports is one way we're going to move toward a plan of having athletics available to everybody, and eSports is a way we're going to integrate online students into campus life."

Snow explained that the teams would be ready to compete in the spring, with tryouts beginning early in the 2018 semester. The college is also building a new eSports room equipped with state-of-the-art computers. "The leadership at this school, the president, the vice presidents, are behind it 110 percent," Snow said.

The article also featured a photo of Oeser, who is one of more than a dozen students to champion eSports on campus.

“The Canajoharie, New York, native came to SUNY Canton and was a [Liberal Arts] general studies major,” Morrison wrote. “Then, the eSports opportunity came up, and with it several new majors at SUNY Canton that complement the program well, including majors in Cybersecurity, Technological Communications and Graphic and Multimedia design. Oeser expressed her interest in eSports and took a shot on another one of the new majors: Game Design and Development.”

Coinciding with the interview, the State University of New York also featured the college’s new Game Design and Development program, which is the academic program that most closely related to competitive gaming.