SUNY Canton celebrated the accomplishments of nearly 900 graduates during the college’s 110th Commencement ceremony held Saturday, May 12, at the Roos House Convocation Athletic and Recreation Center.

President Zvi Szafran and SUNY Canton College Council Chair Ronald M. O’Neill, class of 1963, welcomed family and friends and congratulated the class of 2018 on their accomplishments. 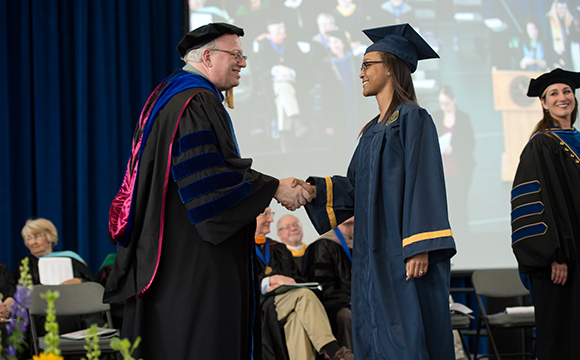 President Zvi Szafran congratulates graduates as they cross the stage.

Both also took the opportunity to acknowledge a special milestone in college history. It was five decades ago that SUNY Canton moved from a small cluster of buildings adjacent to the St. Lawrence University campus to its current location, marking a new era.

“All graduations are special, but you have the added distinction of being the class who graduates during our ‘50 Years on the Hill’ commemoration,” O’Neill said.

Szafran read a congratulatory message from alumna Rosella M. Todd Valentine, who was among the first cohort to graduate from the new campus in 1968. 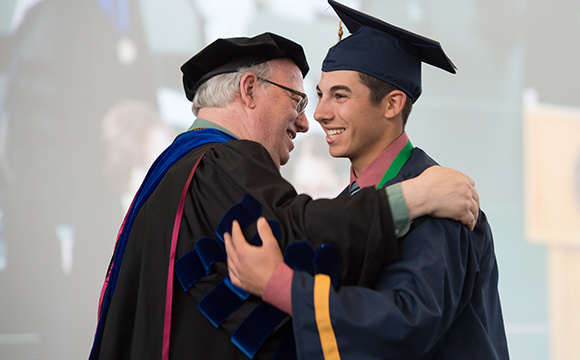 “The year 1968 was a tumultuous and pivotal year, and so is 2018,” she wrote. “You have much to look forward to, but also much to do. Go out, do good things, and always remember the wonderful start this college has given you.”

Szafran noted this year’s class comprises graduates who range in age from 18 to 62 years old and represent 17 different states and 7 foreign countries, including Angola, Australia, The Bahamas, Cameroon, Finland, Sweden and Canada.

He then introduced Student Government Association President and David R. Maynard Student Activities Award winner Rachel “Nikki” Zeitzmann, who delivered the senior class address. She encouraged her fellow graduates to build upon the lessons they learned while completing their degrees. 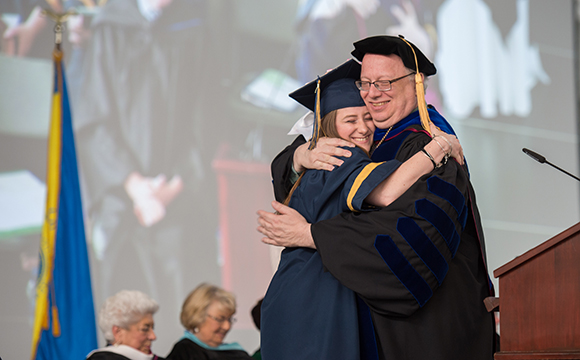 “My hope is that we continue to expand what we have built as groundwork here into our future careers,” she said. “We may be separated, but we will never be divided from our SUNY Canton foundation.” 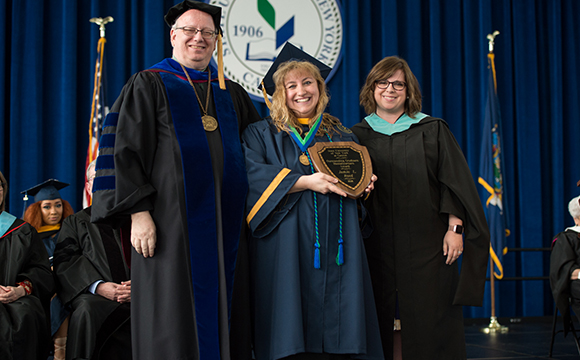 The keynote address was delivered by Pulitzer Prize winner John G. Maines III, who attended SUNY Canton from 1976 to 1977.

Maines earned the most prestigious award in American journalism while he was working for the South Florida Sun Sentinel in 2013. He and colleague Sally Kestin authored an in-depth investigative report about speeding by Florida’s off-duty police officers that earned the paper its first Pulitzer and led to sweeping reform and disciplinary action across the state.

He recounted the story of how he began his studies at SUNY Canton with the intention of becoming an engineer, but changed course once he began writing for the student newspaper.

“I had fun; I wrote stories and editorials,” he told the audience. “Newspaper work was what I really wanted to do—it was exciting and always challenging and changing. It wasn’t until years later that I first heard the phrase ‘follow your bliss,’ but that is exactly what I had done.” 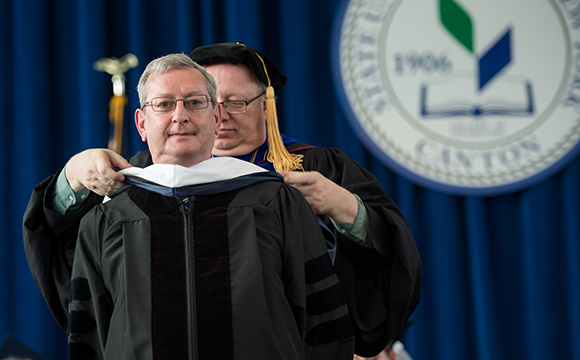 After nearly twenty years of working as a reporter, Maines said he switched to a new area of investigative work in the late 1990s called computer-assisted reporting, or CAR. Ironically, he was able to draw upon the skills he learned while attending SUNY Canton as he learned about this highly technical field.

“I found the discipline, logic, science, critical thinking and other things I learned at Canton to be a tremendous help in that change,” he said. “It was database work, in fact, that helped investigative reporter Sally Kestin and I win the Pulitzer.”

Szafran presented Maines with an Honorary Doctor of Humane Letters for his contributions to the field of journalism.

As the degrees were conferred, the President of the Alumni Board of Directors Kelly Obermayer, class of 1979, welcomed each graduate into the alumni family by presenting them with a special medallion. 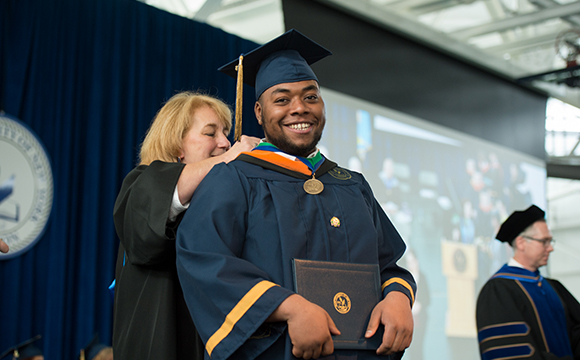 Additionally, more than 90 graduates from the college’s one and two-year Nursing programs were recognized at special pinning ceremonies held earlier in the week.