Both teams will be looking to continue their undefeated ECAC season record and earn the college’s first championship titles in esports.

The FIFA team, comprised of students from the Kangaroos men’s soccer team and other enthusiasts, is scheduled to play Texas Wesleyan University at 5 p.m., Thursday. FIFA was announced as a new esports offering at the beginning of the fall 2018 semester. The team is mentored by volunteer coach Morgan Elliott, the college’s videographer. 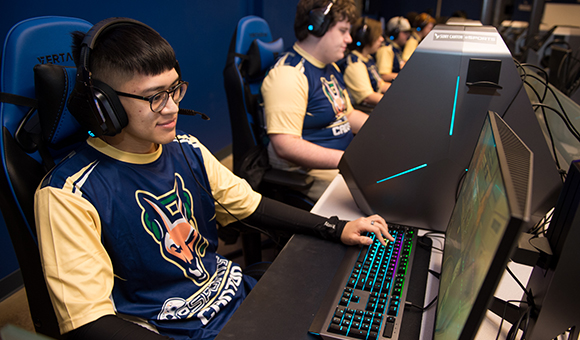 My V. Dang, a competitive gamer with SUNY Canton’s esports program from Syracuse, practices with the Overwatch team in preparation for an Eastern College Athletic Conference (ECAC) championship match. The team was undefeated during the ECAC regular season.

“It’s been a great first season,” Elliott said. “The students have been a pleasure to work with and they truly shine in the game. We love to see the integration and comradery between traditional student athletes and gamers.”

Overwatch will take on the college’s noted esports rival, Marist College, at 9 p.m., Thursday. Overwatch is one of the original three games the college adopted a year ago when beginning its venture into collegiate esports.

“Our season has really showed me what we are collectively capable of achieving,” said Emily J. Oeser, Overwatch team captain and a Game Design and Development major. “The team has been dedicated to their practice and discipline. This season has showcased our growth as players, teammates and friends.”

The 12-member coed team is overseen by Head Esports Coach Robert J. Snow, who is also an instructional support associate in the Canino School of Engineering Technology.

“I’m extremely happy that two of our teams made it to the finals in the ECAC’s inaugural season in competitive video gaming,” Snow said. “It has been a joy watching strangers come together through their love of the game and work as a team to succeed in competition.”

The college will be live streaming both final matches on its Twitch channel: www.twitch.tv/sunycanton.

The college’s Hearthstone team also had a successful season and currently has a 5-1 record. The team will be playing their final regular season match against Marist College at 9 p.m. Wednesday, which will seed them in for their championship matches. The League of Legends team posted a 3-2 ECAC record and Fortnite also finished with at 3-2 record to close out the semester.