SUNY Canton’s new eSports Hearthstone team will be participating in its first live broadcast match-up against the University of Utah at 9 p.m. tonight (Tuesday, Feb. 20) on the PlayHearthstone channel on twitch.tv. To watch the match, visit www.twitch.tv/playhearthstone. 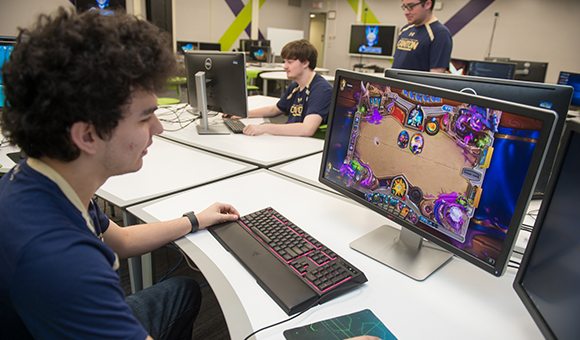 “Tonight’s match is going to be fantastic,” Snow said. “This is our first National Association of Collegiate Esports (NACE) event. We’re honored to be one of the teams selected for this exposure. Streaming is going to be an important part of our program.”

The college’s three-member team has been preparing for an entire month and previously matched against the University of California-Berkeley during a non-streamed competition. Hearthstone is a strategy-based game involving an element of chance. The Kangaroos drew several cards in a less-than-probable scenario that led to their first loss.

“UC Berkeley used a transform card that had a one-in-twenty chance of being effective,” said Team Captain Brian A. Venard, a Sports Management major from East Setauket. “It worked.”

Venard said they’ve changed a class in their lineup and are excited to compete in tonight’s game. “The first-match jitters are over,” he said. “We’ve gotten a lot better at working together and communicating as a team.”

SUNY Canton Roos eSports are run through the college’s Athletic Department. The Hearthstone team competes through NACE, the most prominent nationally recognized organization dedicated to competitive collegiate video gaming. The college also has a League of Legends team and an Overwatch team.

The match will be broadcast by Tespa, a network that promotes gaming culture and hosts college eSports events and competitions.