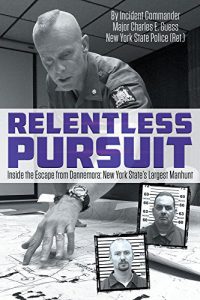 Four New York State Police officers and an official with the New York State Office of Special Investigations who were involved in the 2015 high-profile pursuit of Dannemora prison escapees Richard Matt and David Sweat will speak at SUNY Canton as part of the college’s annual Law Enforcement Day Wednesday, March 28.

Retired New York State Police Maj. Charles E. Guess, who was the incident commander during the 23-day manhunt, will speak at 9 a.m. in the Richard W. Miller Campus Center’s Kingston Theater. He is the author of the 2017 book “Relentless Pursuit,” a first-hand account of the largest search in state history.

“I can certainly claim an insider’s point of view … as to what I saw, what I experienced and how we did things both strategically and tactically during those 23 days with all of our federal, state and local partners,” Guess told WAMC Radio in an interview last year.

Guess’ colleagues Sgt. Jay Cook, Sgt. Ronald Pena and Sgt. Christopher Giovazzino will also discuss their involvement in the operation, which ended with Matt being shot and killed by a U.S. Border Patrol SWAT team, and Sweat being shot and wounded by a state trooper.

All events will be held in the Kingston Theater and are free and open to the public; parking is available in Lots 1, 6, 7 and 13. Guess will be available for book signings following the discussion.

This is the college’s eighth annual Law Enforcement Day. It is designed to give students an opportunity to meet with and hear from experts in the field. Criminal Justice, Criminal Investigation and related two- and four-year programs are among the most popular degrees offered at the college.