SUNY Canton is doubling its textbook loan program in an effort to offset the cost of attending college.

“Our Southworth Library Learning Commons has an extensive collection of textbooks held on reserve for students who cannot afford to purchase them,” said SUNY Canton Provost and Vice President for Academic Affairs Douglas M. Scheidt. “This year I’ve doubled their budget, from $6,000 to $12,000, to help further reduce financial barriers to education.” 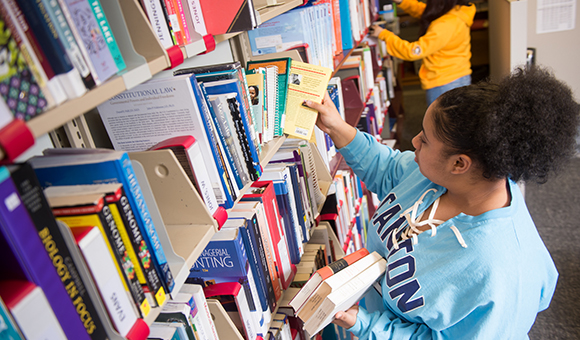 The cost of textbooks has risen by 73 percent over the past decade, according to a 2016 report by the U.S. Public Interest Research Group. Almost a third of students reported that they had used their financial aid to pay for textbooks, which can lead to financial insecurity during their education. “Economic hardship is one of the reasons students withdraw from college,” Scheidt said.

The current collection includes textbooks for almost every single major, and almost all the textbooks for general education courses. The provost said 71 percent of courses have a text on reserve at the library. The library loaned items from its reserve text collection more than 12,000 times during the 2016-2017 academic year. 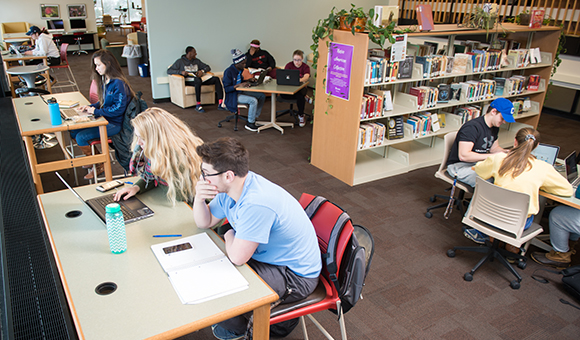 “We try to purchase the books that will have the greatest potential financial impact,” said Southworth Library Director Cori Wilhelm. “We purchase books for high-enrollment courses with the most expensive texts. We also try to purchase as many eBooks as we can.”

Some, but not all, courses may require ownership of a text. Many students have been able to check out one of the reserve copies for a couple of hours and complete their studies. Other students check out the texts and then go on to purchase or rent them from the school bookstore.

The library also loans cameras for use in the Criminal Investigation and Graphic and Multimedia Design program. Students can also check out computers, iPads, phone chargers and calculators from the circulation desk.

Wilhelm and former college Librarian Rachel Koenig authored a chapter in the book “Textbooks in Academic Libraries: Selection, Circulation, and Assessment” titled Basically Everything I Need, I Know the Library Has it: A Case Study of SUNY Canton’s Textbook Program.

The textbook loan program and innovative technology offerings are among the reasons the Southworth Library earned number one rankings in the 2015 SUNY Student Opinion Survey, which compares student satisfaction at 27 state-operated colleges and university centers.

The textbook loan program began more than 10 years ago at the Library. It has received funding from the Carl D. Perkins Career and Technical Education Grant and the Canton College Foundation. Library employees and college faculty members have also purchased and donated books for the program.