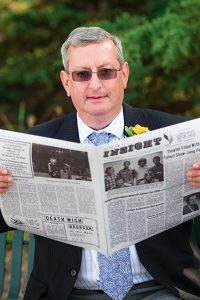 A Pulitzer Prize-winning reporter who began his journalism career in the North Country will deliver the keynote speech at SUNY Canton’s 110th Commencement Ceremony at 10:30 a.m. Saturday, May 12, in the Roos House Convocation, Athletic and Recreation Center.

John G. Maines III, who attended SUNY Canton from 1976 to 1977, earned the South Florida Sun Sentinel newspaper its first Pulitzer Prize for Public Service in 2013 for a groundbreaking investigative report about speeding by Florida off-duty police officers. Maines and colleague Sally Kestin authored a three-part series titled “Above the Law,” and their findings led to sweeping reform and disciplinary action by police departments across the state.

“John is one of the most esteemed members of our alumni family, and we’re pleased to welcome him back to campus,” said SUNY Canton President Zvi Szafran. “John’s life’s work is an example of journalism’s value as a government watchdog and ally of public safety.”

A reporter for more than 40 years, he began his career writing for SUNY Canton’s student newspaper, the Insight, until he was recruited to work full-time for the Massena Observer. He subsequently went on to work for the Ithaca Journal and the Clarion-Ledger in Jackson, Miss., before becoming a freelance writer based in Washington, D.C. In the late 1980s, he became interested in computer-assisted reporting, or CAR, a technique that reporters use to gather and organize data for articles.

Upon joining the Sun Sentinel in 1993, he used his CAR background to assist the research team on a number of high-profile investigations, including voting irregularities in the 2000 presidential election, Florida’s connections to the Sept. 11 terrorists, and widespread FEMA fraud after Hurricane Frances in 2004.

He is the recipient of numerous journalism honors, including the Associated Press Managing Editors Public Service and First Amendment awards, the Investigative Reporters and Editors Award, and the Roy W. Howard Award in Public Service Reporting from the Scripps Howard Foundation. He was also a finalist for the Pulitzer Prize for Investigative Reporting in 2006 for the FEMA series.

Maines attended SUNY Canton to study Agricultural Engineering and attributes his success in CAR to his interest in and aptitude for technology.

“I’ve been really lucky,” he said. “I took a sharp turn from engineering into journalism, but many of the skills I learned at SUNY Canton have stayed with me throughout my career.”

He was inducted into the SUNY Canton Hall of Fame in 2016 and will receive an honorary Doctor of Humane Letters degree in recognition of his accomplishments.