The two colleges will face off in Blizzard’s Overwatch at 7 p.m. (Eastern Time), Thursday Dec. 6, with Canton’s team playing from the college’s Esports Arena in Nevaldine Hall. The event will be live-streamed at www.twitch.tv/sunycanton. 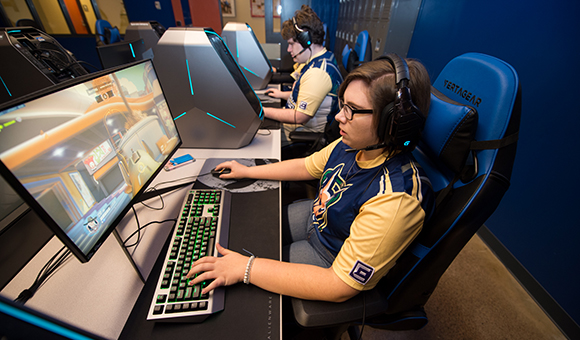 SUNY Canton is among the first colleges in the nation to recruit an all-women’s varsity esports team.

“Nationally and in the college ranks, the majority of eSports participants are young men,” said Head Esports Coach Robert J. Snow. “We’ve been fortunate to have the strong leadership of team captain Emily A. Oeser, who jumped at the chance to assemble an all-women’s team and ensure we were including our female competitors who wanted to compete in varsity esports.”

Upon creation of the team, Oeser and Snow began looking for other all-women’s collegiate teams to compete against. They discovered the Stephens College team and reached out to their head coach, Ernest Utterback to orchestrate a match. Stephens has played a successful season against more than a dozen traditional mixed-gender teams.

“The beautiful thing about esports is that women and men can compete equally against each other whether its coed or single gender teams,” Utterback said. “We are pleased to have the opportunity to compete against SUNY Canton as they seek to expand their offerings to more women.”

“Esports skills are based on teamwork, sound decision making, mental acuity, skills and reflexes,” said SUNY Canton Director of Athletics Randy B. Sieminski. “We are tremendously proud of all the success that our teams have had since their inception, and we’re pleased to be participating in this historic event featuring two all-women’s teams.”

All online matches are powered by Extreme Networks, the college’s partner in competitive gaming.