SUNY Canton has created a new garden area in honor of a stalwart and pragmatic area farmer who graduated from the college in 1954.

The Canton College Foundation recently announced that an area adjacent to the college’s Peace Garden had been retooled to house the Kenneth Theobald Botanical Nursery, following donations from the namesake’s family and friends. The area will be used to cultivate seedlings that will be transplanted to become part of the verdant campus landscape. 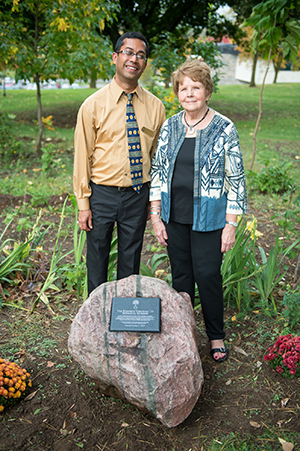 The effort was spearheaded by Barbara Theobald Rich Wilder, a graduate of the class of 1953 and 1970, who serves on the College Foundation’s board of directors. She said she wanted to make a contribution in her brother’s memory and her family, 15 of whom graduated from SUNY Canton, rallied to support the effort.

“Ken was a modest man, a quiet man, but he had a vision and was always looking forward,” Rich Wilder said at an event unveiling the new area. “This is not just a nursery, but an outdoor classroom for students. It is a living memorial. Seedlings planted here will grow to replace the aging trees on campus and the effort will connect with environmental studies at the college.”

After graduating with an agricultural degree, Theobald operated a farm on the Rich Road in Canton for more than 50 years. At the age of 74, he purchased a hobby orchard in Vermont and changed his focus from cattle to growing fruit-bearing trees. He was a noted conservationist with a sense of wonder about the natural world. Theobald passed away in 2016 at the age of 81.

His daughter, Carol, said Ken was an eminently humble man and a life-long learner. 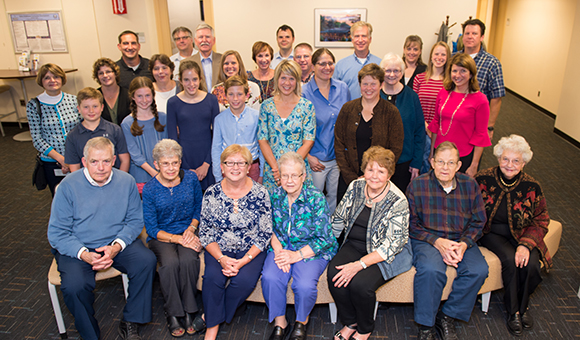 A large group of family and friends gathered for the Kenneth Theobald Botanical Nursery dedication ceremony. Theobald was a 1954 graduate with many ties to the college and the community.

“This project is an obvious match between a man and his mission, because it exemplifies two qualities that were central to Ken’s Life,” she said. “The first quality is education and experiential learning. The second is stewardship, rooted in a moral responsibility to build a vibrant sustainable community.”

Representatives from the Canton College Foundation were overjoyed to help facilitate the creation of the new nursery, which helps fit in with the college’s sustainability and ecological goals in addition to beautifying the campus.