“We are thrilled that 241 students from the surrounding area came to spend the day learning about engineering technology fields, hearing from a leader in solar energy research and experiencing SUNY Canton’s hands-on, applied learning philosophy,” said Women in Engineering Day Committee Chair and SUNY Canton Assistant Professor Kathleen Mahoney, who teaches in the Graphic and Multimedia Design program. 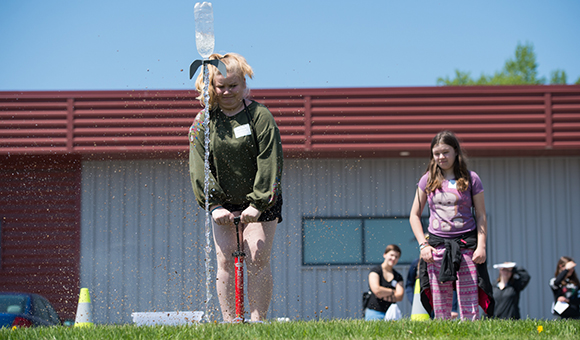 A student launches a bottle rocket during the 2018 Women in Engineering Day.

The guest speaker was Deidra R. Hodges, Ph.D., an assistant professor in the Department of Electrical and Computer Engineering at the University of Texas at El Paso. She previously worked on NASA’s Space Shuttle program in Avionics while with IBM’s Federal Systems Division, and later joined Martin Marietta Manned Space Systems where she conducted independent research in support of NASA’s Unmanned Shuttle C proposal.

“Dr. Hodges has experienced a lot of adversity throughout her life, particularly when she and her family had to relocate from Louisiana after their home was destroyed by Hurricane Katrina,” said Lisa M. Beldock, a living environment science teacher at Ogdensburg Free Academy high school. “I think it was important for students to hear from someone who has persevered despite major setbacks, as well as the added obstacles she faced as a woman in a male-dominated field.”

There were several new workshops offered this year, two of which aligned with the college’s recently added four-year Game Design and Development program and varsity eSports team. A “Women in Gaming” presentation was led by student and Game Design major Emily A. Oeser, who is the captain of the college’s all-female and co-ed “Overwatch” eSports teams.

Other highlights included demonstrations about cutting-edge research in the field of artificially intelligent prosthetics and how virtual reality is used in the architecture and construction industries. Students also had the chance to learn about aerodynamics by launching homemade water rockets.

Arconic Inc. was the lead sponsor of the event. Additional sponsors were the St. Lawrence County Branch of the American Association of University Women, the North Country Young Women’s Leadership Institute, and New York State’s Collegiate Science and Technology Entry Program. Funding support for the keynote speaker was provided by a Carl D. Perkins Career and Technical Education Grant.