The four-week training is designed for those who are already working in the corrections field, as well as for current SUNY students. All graduates earned a certification from the New York State Division of Criminal Justice Service (DCJS), and SUNY Canton students received an additional four credit hours toward their degree. 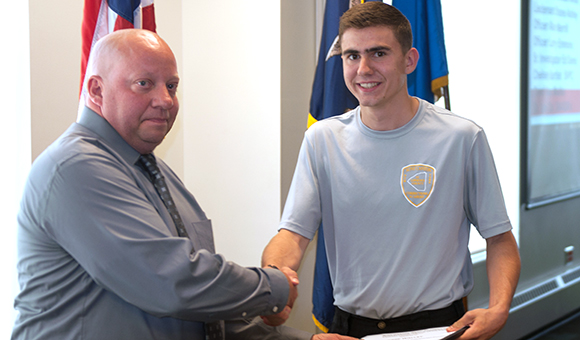 “I was most impressed by the dynamic between our relatively new officers and the SUNY Canton students,” said Rodney Votra, academy director and training coordinator for the St. Lawrence County Sheriff’s Office. “The officers brought real-life experience that coincided perfectly with the knowledge students have gained while completing their degrees.”

“From a student perspective, the academy was a valuable experience because it not only prepares us for a career in corrections, but the concepts we learned are applicable to a variety of different law enforcement professions,” said Jesse T. Walley, a SUNY Canton Law Enforcement Leadership major. 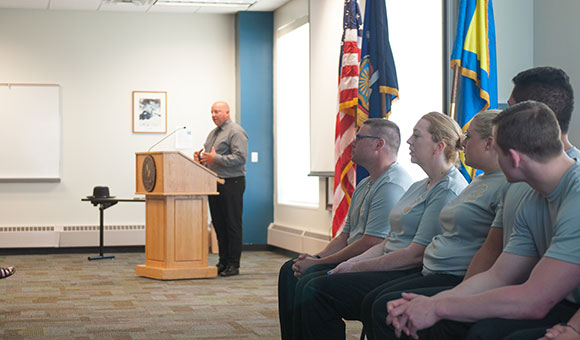 The Corrections Academy, a collaboration between the DCJS and the St. Lawrence Country Sheriff’s Office, is one of the very few programs of its kind linked with a college in New York State and is the only option connecting traditional academic offerings directly to this in-demand employment field. Students can enroll in the corrections academy and also potentially enroll in the David Sullivan St. Lawrence County Law Enforcement Academy as part of their SUNY Canton education, which can lead to a four-year degree with pre-certifications as both a corrections officer and police officer.

The center is also currently hosting its first two-week corrections supervisor training that offers more than 60 hours of instruction for professionals working throughout the state.

The academy’s next session is scheduled for June 2020. For more information, visit www.canton.edu/cacademy/.