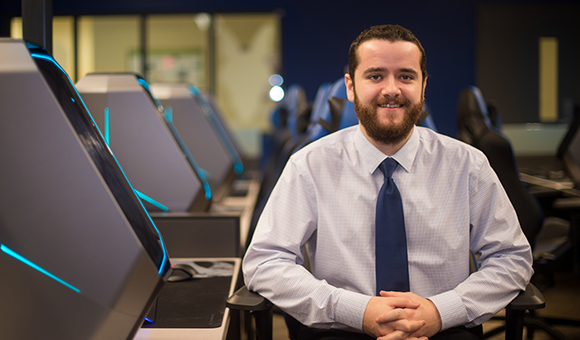 “Our esports program continues to grow and expand remarkably fast,” said Sieminski. “Our biggest challenge has been keeping up with the incredible popularity of the program. We now have nearly 50 esports competitors, and we’re discussing adding at least one more team this spring. We’re excited to have someone with Charles’ coaching experience and teaching background join us so SUNY Canton can continue to be a national leader in collegiate gaming.”

Murray comes to SUNY Canton from the Ellenville Central School District where he served as an esports coach at Ulster BOCES and taught in the district’s Media Center. He also taught global studies for a year in the New Paltz Central School District. He is a grandmaster ranked “Overwatch” player and now oversees the college’s team. 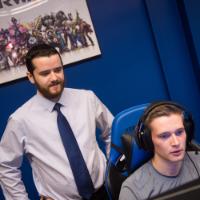 “It’s a thrill to be joining such an accomplished, successful program,” said Murray. “SUNY Canton’s entire executive leadership team, particularly President Zvi Szafran, has demonstrated such dedication and support for our gamers. Coach Rob Snow and others have made SUNY Canton’s teams top competitors. I look forward to building on our successes.”

Murray earned both his bachelor’s and master’s degrees from SUNY Potsdam.

The funding for Murray’s full-time position comes from a SUNY Performance Investment Fund Grant obtained by the school’s Associate Provost and Dean of Academic Support Services Molly A. Mott

“Esports supports and naturally connects with so many of our academic majors such as Game Design and Development, Cybersecurity, Graphic and Multimedia Design, Technological Communications and many others, including our engineering and STEM offerings,” said Mott. “It’s also been shown that engaged students are more successful with higher retention and graduation rates. Esports helps us improve on those goals in addition to offering opportunities for our large percentage of online students to participate in college athletics.”

SUNY Canton esports has been extensively featured in regional and national news media, including ESPN, the Washington Post, the Syracuse Post-Standard, the Watertown Daily Times, WWNY-TV in Watertown and television stations in Buffalo, Syracuse and Albany.

“SUNY Canton’s students have been a powerful driving force moving the program forward,” added Murray. “Our skilled and talented competitors strive to compete and win. I can’t wait for even more success and championship titles. We will continue to recruit top students from around the nation.

High-speed low-latency networking for the space is provided by Extreme Networks, the college’s partner in competitive gaming.

“Esports provides our students with nearly all the benefits of traditional athletics,” said Sieminski. “It gives our competitors opportunities to learn leadership, sportsmanship, teamwork, social responsibilities and so much more. These are things that will make them more well-rounded and desirable for prospective employers after graduation.”