My V. Dang, a Game Design and Development major from Syracuse, and Alexander DeLavergne, an undeclared major from Heuvelton, both received awards for their gameplay during the tournament. The team crushed competition in elimination rounds before falling to Rensselaer Polytechnic Institute (RPI) in the championship match. 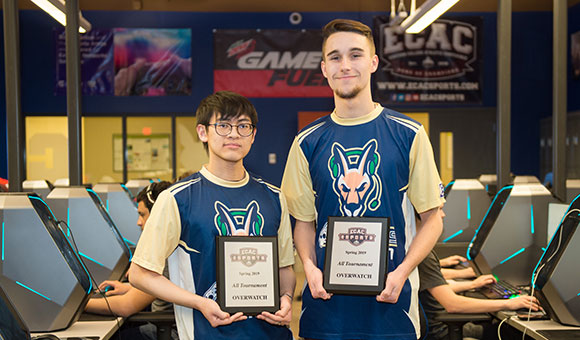 Pictured are (l to r) My V. Dang, a Game Design and Development major from Syracuse, and Alexander DeLavergne, an undeclared major from Heuvelton, holding their Eastern College Athletic Conference plaques. The teammates play on SUNY Canton’s “Overwatch” as part of the college’s competitive esports program.

“HV Gamer Con presented a new level of accomplishment for our team,” said Charles W. Murray III, SUNY Canton esports coordinator and Overwatch coach. “Our most defining match was played in the finals when we toppled Drew University before advancing to face RPI.”

The team had posted a 6-0 record during the regular season and were seeded second going into the tournament. Their loss was the team’s first recorded defeat in ECAC play.

Although the majority of ECAC play is drawing to a close, the Roos esports teams are far from done playing. Mountain Dew Game Fuel has sponsored a series of exhibition matches against Alfred State beginning at 5 p.m. Friday, April 5, in the SUNY Canton eSports Arena. The vast majority of eSports matches take place online, so this event marks the first time the college has hosted a live home game.

The college has recently partnered with Mountain Dew Game Fuel, which has rapidly become the preferred drink among SUNY Canton gamers. The company has provided drinks and branded merchandise to be used in the esports program and for prizes.

Other partnerships include a campus-wide connection with Extreme Networks, who provides the high-speed low latency connections for competitive video games.