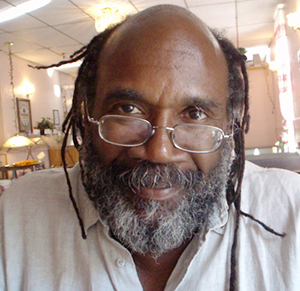 Flowers will discuss and perform excerpts from his latest children’s book, “Brer Rabbit Retold,” at 6:30 p.m. Wednesday, Feb. 27 at The TAUNY Center, 53 Main Street in Canton. The event is free and open to the public, and light refreshments will be served.

The Brer Rabbit figure originated in African folklore and was integrated into oral tales by slaves in the American South. In his book, which incorporates audio and video, Flowers re-tells them for children and adults, connecting the spoken and written word in surprising ways.

“Flowers is a modern sage, drawing contemporary wisdom from these timeless folktales. His performances are memorable, suitable for all ages, and not to be missed,” said SUNY Canton Associate Professor Phil K. LaMarche, who created the Living Writers Series. “We welcome the community to join us and celebrate African American History Month.”

As the first Living Writers Series event to be held off campus, LaMarche explained that TAUNY’s performance space was a natural fit for the event.

“We look forward to bringing our students downtown and engaging with the community,” he said.

A native of Memphis, Flowers often utilizes African instruments in his unique style of storytelling. He considers himself a modern-day “griot,” a person who maintains a tradition of oral history, most notably in West Africa.

“We’re so pleased to have the opportunity to co-host this SUNY Canton Living Writers Series event at TAUNY,” said Camilla Ammirati, TAUNY’s Director of Research and Programs. “What a great opportunity for the community not only to enjoy a presentation by such a talented, engaging, and thoughtful artist, but to see how his contemporary interpretation of the Brer Rabbit folk tales brings out the urgent, moving relevance of folklore, and more specifically of these tales and songs rooted in centuries of African-American and African experience.”

Flowers teaches African-American literature at Syracuse University and is the author of the books “I See the Promised Land: A Life of Martin Luther King, Jr.,” “Mojo Rising: Confessions of a 21st Century Conjureman,” “Another Good Loving Blues” and “De Mojo Blues.”

Flowers is a Living Writers Series alum, having previously spoken at the college in 2014.

The Living Writers Series continues next month with another returning speaker, Iain Haley Pollock, who will appear at 6:30 p.m. Thursday, March 21.

TAUNY is the only organization in New York’s North Country dedicated to showcasing the folk culture and living traditions of the region.TAUNY collects, preserves, interprets, and presents the customs and traditions of the North Country. With archives, exhibits, and programs in Canton and throughout the region, TAUNY celebrates the diversity of living traditions inherited from the past, maintained in the present, and passed on to the future.