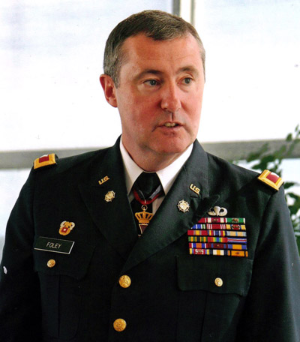 An alumnus and veteran who helped lead rescue and recovery efforts in New York City following the 9/11 attacks will be the keynote speaker at SUNY Canton’s 2019 Commencement Ceremony.

Retired Major General Fergal I. Foley, class of 1980, will address nearly 900 graduates at 10:30 a.m. Saturday, May 11, in the Roos House Convocation, Athletic and Recreation Center. He will receive an honorary Doctor of Humane Letters degree in recognition of his accomplishments.

“Major General Foley’s distinguished career epitomizes the level of excellence our graduates can achieve with the foundation that a SUNY Canton education provides, and we’re pleased to be able to present him with this honor,” said SUNY Canton President Zvi Szafran.

He served in the New York Army National Guard from 1982 until 2006, during which time his assignments included Deputy Commander and Chief of Staff for Joint Task Force “Operation World Trade Center” after 9/11. He is currently the Senior Property Manager for the U.S. General Services Administration.

Foley not only has a history of service to his country, but also of giving back to SUNY Canton. He is a member of the Alumni Association Board of Directors, a scholarship donor, and has visited campus on several occasions to discuss his experiences following 9/11.

“I am truly honored to be invited to speak at this year’s ceremony,” Foley said. “SUNY Canton has always been a special place for me as a student and now as an alumnus. I look forward to addressing the graduates on this special occasion.”