The SUNY Canton Living Writers Series is honoring Native American Heritage Month with a guest speaker whose poetry deals with the marginalization of Native people.

Santee Frazier will speak at 6:30 p.m. Wednesday, Nov. 20 in the Richard W. Miller Campus Center’s Kingston Theater. The event is free and open to the public. 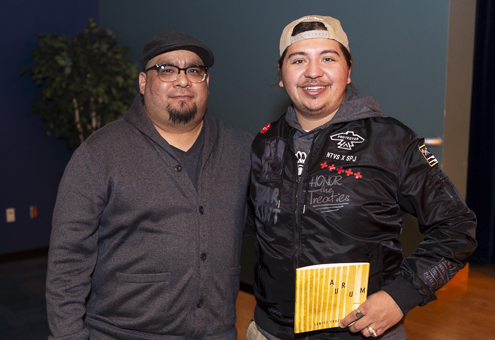 Native American Poet Santee Frazier poses for a photo with Brayden White. Frazier is a member of the Cherokee Nation of Oklahoma, and White is one of the college’s proud students from Akwesasne.

Frazier, a member of the Cherokee Nation of Oklahoma, will read from his recently released poetry collection, “Aurum,” which, according to the publisher, captures the vibrantly original language in Frazier’s first collection, “Dark Thirty,” while taking on a completely new voice and rhythm.

Frazier previously visited the college in 2013 to read from his first collection. Many of the themes and characters from “Dark Thirty” are continued in “Aurum.”

Frazier is the director of the Institute of American Indian Arts Low Residency MFA Program in Santa Fe. His poems have appeared in Ontario Review, American Poet, and Prairie Schooner, among others.