A SUNY Canton Mechatronics major is designing a revolutionary knee brace that may help about 20 percent of the population walk easier.

Maelea M. Mercado of Jefferson recently took second place for her research presentation on her invention at the Institute of Electrical and Electronics Engineers (IEEE) Undergraduate Research Technology Conference held Oct. 11 to 13 at Massachusetts Institute of Technology (MIT). 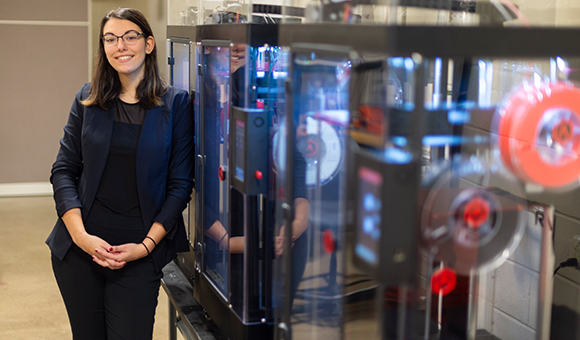 “Maelea’s research project is a fantastic representation of the Mechatronics program,” said J. Miles Canino, Ph.D., who serves as Mercado’s research advisor. “She’s identified a problem and is utilizing advanced robotic principles to address this significant medical disability. Her studies stand as some of the most innovative in the nation.”

Mercado is developing an active-damping knee orthosis for people with Ehlers-Danlos Syndrome (EDS). The disease causes hypermobility issues. “People with EDS are too flexible,” Mercado said. “One of their biggest complaints is hyperextension, especially in their knees. This hyperextension can happen every time a person takes a step.”

The only option for treatment thus far has been long-term physical therapy. Traditional orthotics rely on taking strain off the joint which can cause the surrounding muscles to atrophy, further diminishing the knee’s stability. “We’re creating a non-supportive knee brace that limits the range of motion,” Mercado said.

Early models resemble traditional supports but include magnetorheological dampers, which look similar to small shock absorbers, on either side of the brace. The dampers provide fluid resistance to keep the knee joint from flexing too far forward. The device generates an electrical current, which allows the dampers to automatically adjust to an individual’s walking pattern during every step.

“If you crank your knee forward, more current runs through the system, allowing the damper to intelligently limit your range of motion based on that current,” Mercado said.

Mercado and Canino have identified several people who currently suffer from EDS at SUNY Canton. The next step in their research will begin as early as the spring semester when those individuals and control subjects try the brace during a series of trials. The new orthotic will be studied further to determine how it can help other chronic knee problems. “We’d also like to adapt the technology to assist other joints,” Mercado said.