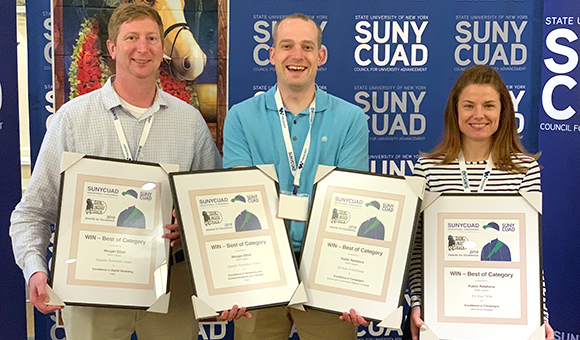 “Earning four first-place SUNYCUAD awards in one year is unprecedented for our department, and it’s a reflection of the depth of talent we have on our team,” said Public Relations Director Travis G. Smith. “We’re competing against some of the most creative professionals in higher education, so it’s quite an achievement to be recognized in this way.”

SUNYCUAD is an organization representing public relations, alumni and development, and marketing specialists at every SUNY campus. The annual awards competition recognizes excellence in more than 40 categories.

The winning esports video, created by Videographer Morgan D. Elliott, documents the college’s efforts to become a leader in the field of collegiate competitive video gaming. It features the college’s new state-of-the-art esports arena, which is one of the largest facilities of its kind in the Northeast. It also includes testimonials from SUNY Canton varsity esports team members and incorporates footage from their matches and tournaments.

“Morgan did an outstanding job of capturing the excitement our entire campus feels about esports,” Smith said. “Viewers come away with an understanding of what the college has accomplished in a short period of time, and they get a sense of the program’s potential to grow exponentially.”

The first-place “It’s Your Time” campaign is a series of video and digital advertisements that promote SUNY Canton’s wide variety of in-demand online degrees. They were seen across several online mediums in 14 cities throughout the East Coast, as well as Southeastern Canada.

SUNYCUAD judges also gave a top prize to the “50 Acts of Kindness” community relations campaign, which promoted a volunteer challenge in conjunction with SUNY Canton’s “50 Years on the Hill” celebration.

“Our goal was to increase awareness about the positive impact that our students have on the surrounding community,” Smith said. “The project also represents SUNY Canton’s commitment to citizenship and commitment to strengthening our relationships with our North Country neighbors.”