Two professional League of Legends players and their manager from SK Gaming in Germany coached SUNY Canton’s esports students over the weekend. 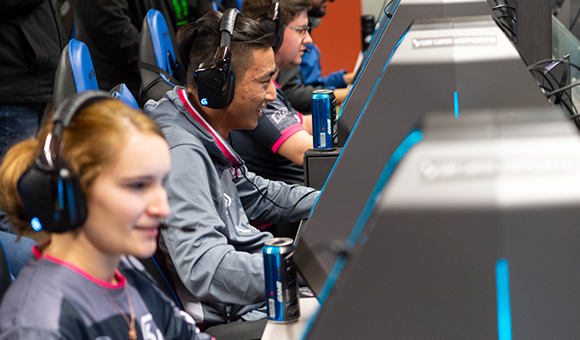 PROFESSIONAL EXPERIENCE - Steven Chen (pictured middle), a professional League of Legends player from SK Gaming in Germany, plays with members of SUNY Canton’s team during a campus visit on Saturday.

“The students were awe-struck after meeting some of their heroes from the professional gaming world,” said Charles Murray, the college’s esports coordinator. “I believe their lessons and their poise will have a lasting impact on our teams.”

SUNY Canton currently has about a dozen students who play League of Legends competitively on two teams. The two players, Garrit Stukemeier (Phrenic) and Steven Chen (Reeker) each played on a team to scrimmage the other. Team manager René Spanier accompanied the teammates and discussed game strategy with college coaches. The visit was orchestrated by Mountain Dew AMP Game Fuel.

“We met dedicated players and great personalities, like ToastyTG [Alec Knowles], Joe [Canton], Kasey [Palmer] and many more,” Spanier said in a tweet. “Let’s stay in touch and maybe we can come around once more.”

Knowles, who is a Graphic and Multimedia Design major from Parishville, said the experience was amazing for the team.

“Thank you so much for taking the time to come see us,” he said. “On behalf of the League team here at SUNY Canton, it means the world to us to see such talented players and staff.” 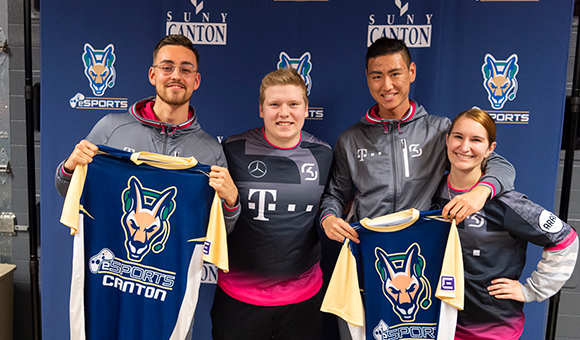 Stukemeier said that despite being a world-recognized professional player, his position on the team is much like any other job, but with different hours. In addition to playing video games 8 to 10 hours a day, players work out three times a week, and meet with a sports psychologist to help them improve their performance.

Both Stukemeier and Chen were impressed with the college’s $500,000 Esports Arena, which features state-of-the art Alienware computers with high-speed, low-latency internet connections provided by Extreme Networks.