“Individuals who choose to become law officers are entering demanding and stressful careers,” noted Police Academy Director of Operations Joseph W. Brown. “We’ve integrated a wellness model to help the next generation of police develop the necessary skillsets to handle the stresses they’ll encounter in the field to help them maintain their physical and mental health.” 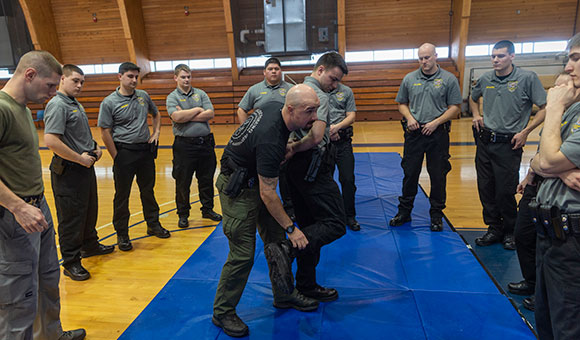 Brown said that the impact of making possible life-or-death decisions and the everyday rigors of modern law enforcement adds to the strain on police officers, resulting in staggering instances of mental health emergencies. The new training focuses on identifying work-related stressors and how to recognize and cope with them every day. It can also position police to be superior community advocates and benefit their personal relationships. “Maintaining a healthy mind and body is just as important as preparing against the dangers they will encounter in the field,” he said.

The Officer Wellness training is a new curriculum implemented by the Department of Criminal Justice Services for this year. Other new courses include Bail Reform and Discovery Law.

Approximately 60 active law enforcement professionals contribute to the intensive curriculum. Cadets are trained in opioid intervention during the first-responder section of the academy and receive body-worn camera training from police who have adopted the new technology.

Cadets can also opt to enroll in pre-employment training, which often leads to career placement with area agencies. SUNY Canton students from the Criminal Justice programs can also enroll in the academy as the final semester of their education.

The St. Lawrence County-David Sullivan Law Enforcement Academy is part of the college’s Center for Criminal Justice, Intelligence and Cybersecurity. SUNY Canton is also home to a new Corrections Academy, which helps students prepare for the growing field.