Brandon J. Baldwin has owned 42 cars over his life, with as many as 14 at one time.

Widely regarded as SUNY Canton’s foremost auto enthusiast, Baldwin is being celebrated for his promotion to associate professor in the Canino School of Engineering Technology, where he has been teaching in the Automotive Technology program for the past 14 years. 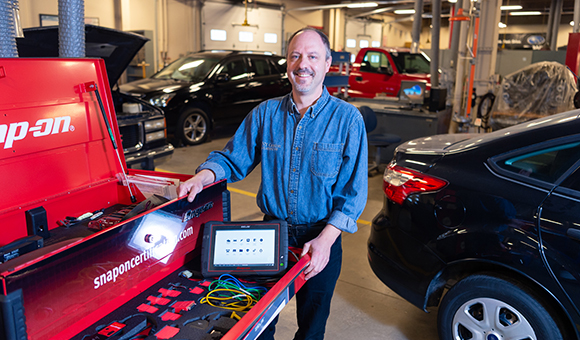 Baldwin was recently noted for moving his hands-on program completely online when the college switched to distance learning in response to the COVID-19 pandemic. On-campus classes resumed in fall 2020.

“I think my favorite SUNY Canton memory is the celebration of our partnership with Subaru,” Baldwin said. “It was a tremendous opportunity for our students, and they were very enthusiastic.”

Baldwin has built relationships with Ford Motor Company and Volkswagen of America through the program’s advisory board. Both companies have donated vehicles and equipment to aid in the college’s continuing evolution. 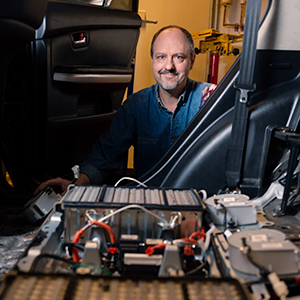 He also helped the college acquire a dynamometer, which is similar to a large-scale treadmill for vehicles. It allows students to measure power, tune, run drive cycles, assist with drivability concerns, and run efficiency experiments.

Not only does Baldwin teach at SUNY Canton, but two of his daughters attend the college. Shelbie Baldwin is currently a senior in the Finance program, and Charlotte Baldwin is a freshman in the Graphic and Multimedia Design program.

Baldwin’s background is in Agricultural Engineering. He earned his associate degree from SUNY Morrisville and his bachelor’s from Cornell University. Following a career as an automotive technician, he earned a masters in Career and Technical Education from SUNY Buffalo State to launch his teaching career. He’s currently working on his doctorate degree.

With future plans of moving his family’s Parishville residence off-grid and acquiring an electric car as a daily driver, Baldwin is researching electric and magnetic fields generated in battery-powered applications, including hybrid vehicles. He’s also designing an agriculture-based equipment care and maintenance course at the college.

Other future plans include expanding his rotating collection of cars. He’s currently planning an eight-cylinder engine upgrade on a Volvo wagon and is building a turbo Subaru-powered 1953 Chevrolet pickup truck.