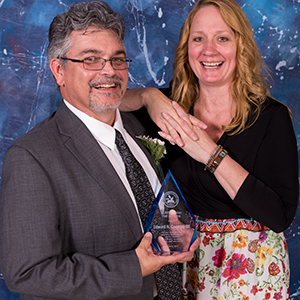 The college selected Edward N. Coombs, current vice chair of the Canton College Foundation Board of Directors, to receive this year’s honor.

He is a New York state-certified public accountant and the managing member of Edward N. Coombs LLC, which provides advisory services to a variety of businesses and non-profits. His financial expertise has been invaluable to the Canton College Foundation throughout the past decade. In addition to contributing to numerous committees, Coombs has served as both chair and treasurer of the board, providing excellent fiscal leadership.

“Ed is a tremendous asset to the college and has been incredibly generous with his time and talent,” said SUNY Canton Vice President for Advancement Tracey L. Thompson. “We couldn’t ask for a better advocate for our school and role model to our student body.”

Originally from Utica, Coombs served in the Marine Corps before attending SUNY Canton. He received an associate degree in Business Administration and a second degree in Accounting. Several years later, he completed his bachelor’s degree in Accounting from SUNY Oswego. An active member of Delta Kappa Sigma fraternity, he has held several leadership positions and maintains strong ties with the organization and with the college. His career in finance and accounting includes positions as CFO and controller for a range of companies.

Coombs joined the Canton College Foundation Board in 2008, and in addition to helping the foundation maintain financial stability, he also provided guidance during the construction of Kennedy Hall. He and his wife, Christine (Howard) Coombs, class of 1985, established the Coombs-Muscarella Endowed Scholarship in 2013 to benefit a student active in extracurricular activities who displays leadership skills. Coombs was inducted into the college’s Hall of Fame in 2017.

“I cannot think of any alumni more deserving of this award than Ed,” said SUNY Canton Foundation Board Member Thomas V. Walsh, class of 1996. “He is always willing to step into any role asked of him for the betterment of our school and its students.”