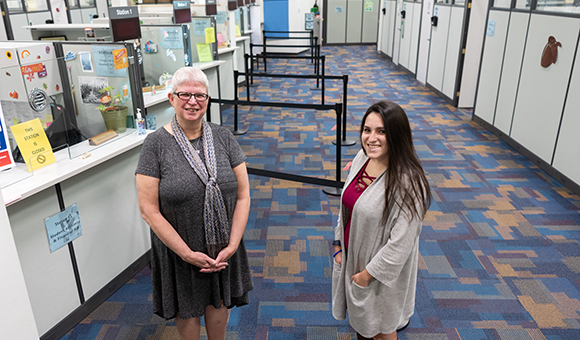 Cooper has been active in NYSFAAA for decades, including serving as its president for two years.

“I was humbled and honored to receive this award as I near retirement,” Cooper said. “My colleagues in the association have also become lifetime friends.”

Cooper has served as the college’s financial aid director since 1992. In 2018, she received SUNY Canton’s President’s Meritorious Service Award in recognition of her efforts to lead the college’s implementation of New York State’s Excelsior Scholarship program.

Rust began working at SUNY Canton in 2017 as a financial aid assistant and was promoted in 2019. As a member of NYSFAAA, she leads an annual week-long training session for new financial aid staff in the region.

“This is a great opportunity for those who are new to financial aid to learn about the most up-to-date policies and practices,” Rust said.

The Rising Star Award is intended to recognize an emerging leader who demonstrates exceptional growth in contribution to the profession.