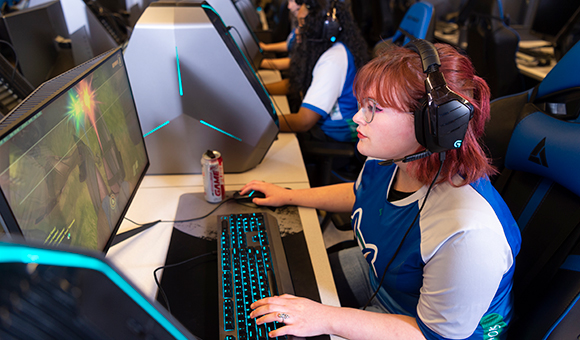 With assistance from Murray, the all-women’s team is coached by Admissions Counselor Kimberley L. Wise. “This is a very driven group of women,” Wise said. “We want to get in the game and compete as much as anyone else.”

The college has been attempting to address the systemic gender division in the competitive esports world and has previously offered all-women’s hours in the esports arena to expand access to the environment and promote a welcoming atmosphere. The college has a contingent of women who play almost every game, with female captains on three teams.

SUNY Canton made history in 2018 by playing the very first known all-women’s collegiate varsity esports match against Stephens College in Columbia, Mo. This year, the team will look for continued opportunities to compete during the semester.

“Our program expands to meet student interest every semester,” Murray said. “Madden was one of the most requested game titles we’ve had. Our student captain is a very motivated leader who has made our addition of the game a complete success.”

Madden NFL is a three-vs-three American football video game played on the college’s Alienware computers in the esports arena.

Murray noted that due to demand, he has added two more Super Smash Bros. teams. “Smash has become the fastest-growing game we have,” he said.