In a video message to the campus community, he congratulated college employees Christina L. Martin and Teresa K. Minckler on receiving the honor. 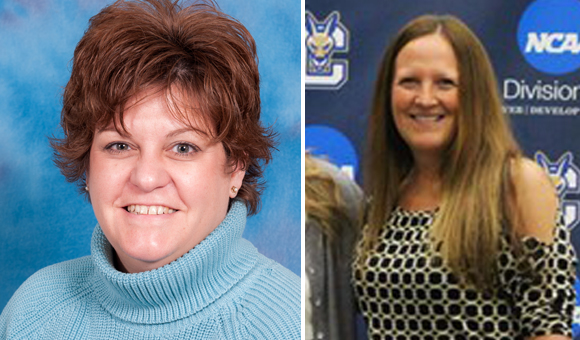 “This year’s winners embody the unique qualities that define who we are as faculty and staff —as mentors and advocates for students, as inspirational motivators, and as Kangaroos, who always move forward,” he said.

Martin has taught in the Early Childhood program since 2007, initially as an adjunct instructor and subsequently as a lecturer. In addition to being an outstanding educator, she was selected for her efforts to improve student success through her service on the First Year Experience Program’s Advisory Board, which seeks to help bridge the transition from high school to college life. In addition, as a member of the Retention Committee, she has helped implement a program that tracks students’ academic progress.

“Christina is deeply committed to her profession and consistently extends support to students to ensure their success and professional preparation,” Szafran said.

In addition, her volunteer work on the St. Lawrence Head Start Policy Council Board, with the St. Lawrence Childcare Council, and the St. Lawrence-Lewis BOCES Early Childhood Advisory Board, among others, has “ensured that the early years of St. Lawrence's County’s children are enriching and placed them on a pathway of success,” said nominator and SUNY Canton Professor Charles R. Fenner, Ph.D.

She was appointed associate athletic director in 2011 and named senior woman administrator, a position in which she has promoted meaningful representation of females in the leadership and management of the college’s athletic program.

Szafran said that in addition to being an outstanding employee, Minckler was selected for her abilities as a role model and mentor, serving as “a coach to the coaches and the glue that holds many of the pieces of the Athletic Department together.”

SUNY Canton Associate Professor Barat Wolfe, Ph.D, who nominated Minckler, said, “I can’t imagine a better person to receive an award of this nature. The Roos House staff are an essential part of the SUNY Canton family, and she is the heart and soul of the department.”