The adventures of young women in World War I fiction created avenues of leadership and self-discovery, according to SUNY Canton Associate Professor Emily Hamilton-Honey, Ph.D. 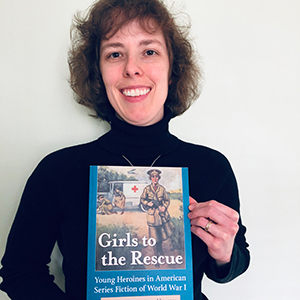 The work is reflective of Hamilton-Honey’s lifelong interest in series fiction, including “The Red Cross Girls,” “The Khaki Girls” and the “Ruth Fielding Series,” all of which contain reoccurring characters in multiple books. Those books made groundbreaking depictions of young women as spies and soldiers rather than traditional home front supporters.

“They reflected the feminism of their time – and raised aspects of feminism that we are still talking about today,” Hamilton-Honey said. “One major example is whether or not, and if so, how women should participate on the battlefield. The young women in these series do everything short of enlisting. They participate as full and patriotic actors in a world crisis, and almost no one questions their wisdom or their right to be there.”

Some 25,000 American women were working oversees during World War I and many more were working on the home front in munitions factories. Much of their involvement has gone undocumented and unrecognized. Some women even used their own finances to go overseas to help as ambulance drivers or in other front-line positions. Fiction was one of the places that brought to light the questions of gender, including women’s responsibilities in combat and wartime, according to research included in the new book.

“The girls in these books are more feminist than the iconic fictional female heroine Nancy Drew,” Lewis said. “​They yearn to contribute, to sacrifice, to be important, and some become quite bitter about the strictures that confine them.”

While the book is primarily designed for an academic audience interested in series fiction, WWI and literary depictions of girlhood, the authors said it would be helpful as a reference in libraries and for teachers looking to create classroom projects based on series literature.

“One of the lovely things about these series is that they are easy to read,” Hamilton-Honey said. “However, there are a lot of complex social and historical issues that come out in the text, and so they are a great way for students to think about historical and social context.”