A faculty member and a staff member from SUNY Canton’s School of Business and Liberal Arts have received State University of New York Chancellor’s Awards. 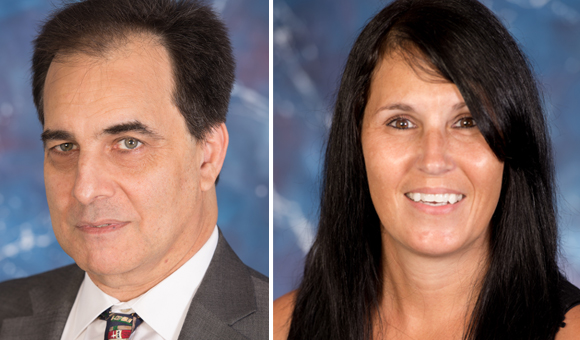 Demo began her career at SUNY Canton in 2008 in the office of admissions. She also worked in the Southworth Library Learning Commons before obtaining her current position as one of the two administrative assistants within the school.

“From the very first day she was hired, Tina exhibited exceptional dedication and work ethic,” said Cori Wilhelm, Library Director. “She quickly made herself an essential part of the campus community. She gives her full attention to each person with whom she interacts and extends care and compassion.”

Zaidi started teaching at SUNY Canton in 2007 and has offered foreign language courses in Spanish and French, in addition to a slew of multicultural courses including world poetry, civilization of Quebec, among others. He was promoted to his current title of professor in 2018.

“During his tenure, Ali has written more than 24 peer-reviewed articles, 15 book reviews, and seven book chapters,” noted Alainya Kavaloski, an associate professor who teaches with Zaidi in the English and Humanities department. “His body of work is a testament to his active intellectual life and his keen commitment to research and scholarship on topics ranging from world literature to freedom in academia.”

Zaidi has a doctorate in Comparative Literature and four master’s degrees.

“Chancellor’s Awards were established to acknowledge and provide system-wide recognition for consistently superior professional achievement and to encourage the ongoing pursuit of excellence,” said SUNY Canton President Zvi Szafran. “I’m proud to join SUNY in recognizing Tina and Ali for their accomplishments at SUNY Canton.”