SUNY Canton will continue the Virtual Living Writers Series this month with an author whose debut novel has just been named to The New York Times Bestseller list. 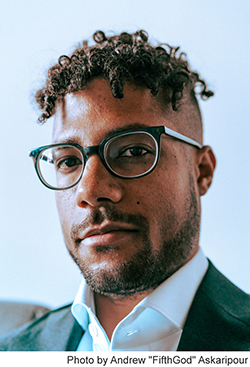 A dark comic tale about corporate America, “Black Buck” is about twenty-two-year-old Darren Vender, who takes a job at a sketchy start-up, only to find that he is the sole Black person employed by the company.

“He goes through hell—mundane and overt racism, self-doubt, and more—to reach the top, which he does,” Askaripour said in a recent interview with Amazon Book Review. “However, he discovers he doesn’t like being the token Black dude, so, with the help of others, he hatches a plan to help other Black and Brown people infiltrate America’s start-up sales teams, redefining what it means to be a minority in the workplace.”

Askaripour was also recently featured in The New York Times and on NPR’s “Weekend Edition”. “Black Buck” was selected for “The Today Show” Book Club in January and has received wildly positive reviews from The Washington Post and The L.A. Times.

The Living Writers Series final Spring guest will be poet Chase Berggrun, author of “RED,” a collection based on Bram Stoker’s “Dracula.” In the book, Berggrun, a trans woman, creates an original narrative of violence, sexual abuse, power dynamics, vengeance and feminist rage. She will appear at 6:30 p.m. Wednesday, May 5.

All events are free and open to the public. To find Zoom link information for all events, visit the Living Writers webpage.