The group of students on the SUNY Canton Steel Bridge Team came in second to the University at Buffalo in the Upstate New York Regional competition. It was held for the first time as a “Compete from Campus” event, where students entered by submitting a video documenting the construction and testing of their steel bridge. 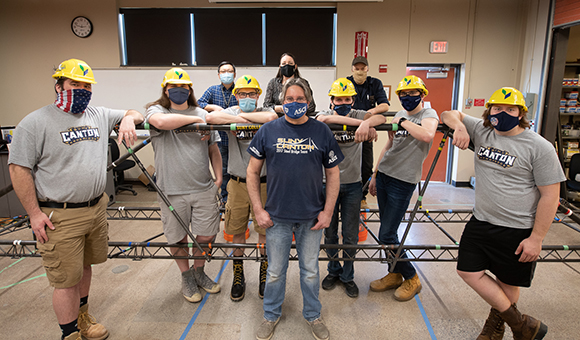 “I am proud to say that our team has persevered despite pandemic cancellations,” said SUNY Canton Instructional Support Associate Paul D. Hitchman, who serves as one of the team’s advisors. “They found a way, as virtual as it may be, to compete and succeed in this year’s competition.”

SUNY Canton students earned first place in the aesthetics category and second place in speed of construction; construction economy; and weight and efficiency. The college now is among 25 schools in the running for the national title, which will again be completed via a video entry and supplementary documentation due May 17.

Civil and Environmental Engineering Technology senior Stephen J. Schermerhorn of Cicero is serving as the captain of the build team. He said the team was able to construct the bridge in a little bit more than four minutes but picked up penalties for dropping pieces or tools. 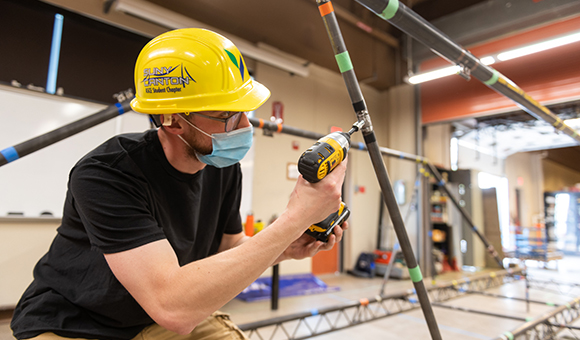 “We’ve been practicing continually in preparation for nationals,” Schermerhorn said. “I think we’ll see fewer, if any, mistakes along with a much quicker run time.”

AISC releases a set of rules based on a real-world scenario each fall. Students must then design a bridge that best fits the complicated parameters. The college’s bridge is fabricated on campus by Dennis Tuper, an instructional support associate for the Automotive Program and an expert welder.

Speed of construction has traditionally been SUNY Canton’s best category, and the entry is typically designed to be assembled rapidly. The students practice assembling the bridge to decrease the amount of time it takes to build it.

Once built, the students must then load the bridge with weights and measure its deflection under the careful watch of an impartial judge. Four other teams who entered this year’s regional competition were not able to complete the test due to excessive deflection.

In addition to Hitchman and Tuper, SUNY Canton’s team is advised by Associate Professor Adrienne C. Rygel, who teaches in the Civil and Environmental Engineering Technology program, Instructional Support Technician Neil A. Haney, and Lecturer Andrew Reiter. Assistant Professor Yilei Shi served as the official judge of the on-campus competition.

The steel used to construct the bridge was donated by 1991 alumnus Eric S. Tessmer, who owns Riverside Iron, LLC, Gouverneur. The team also receives support from the Canton College Foundation and the SUNY Canton’s President’s Office.