SUNY Canton held a socially-distanced 113th Commencement Ceremony for the class of 2021 Saturday, May 15.

Only graduates and college representatives were present at the event, which followed New York State guidelines on capacity, mask-wearing and COVID testing. The ceremony was live-streamed on the SUNY Canton website for families and friends to watch online. 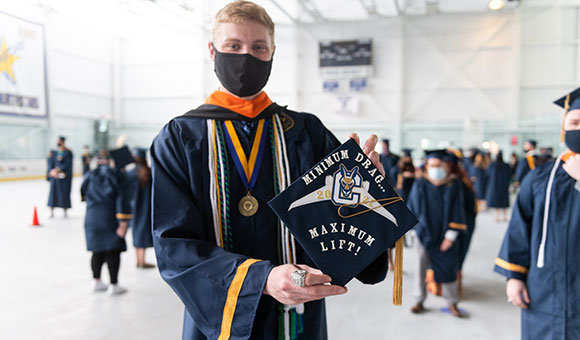 College Council Chair Ronald M. O’Neill, class of 1963, addressed the class of 2021 by video message. He encouraged them to stay connected with one another and to the college.

“As alumni, you will create new memories at reunions and homecomings,” O’Neill said.“There is another chapter in your SUNY Canton story, and I hope to see you back on campus.” 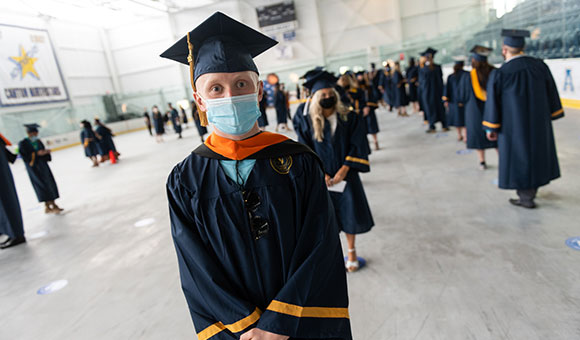 Keegan T. Fawcett, a Health and Fitness Promotion graduate from Gouverneur, waits in line for SUNY Canton Commencement to begin in the Roos House Ice Arena.

President Zvi Szafran told the graduates to use their knowledge to help their communities rebound after the pandemic. “As a SUNY Canton graduate, you have been taught to analyze and problem-solve. These skills won’t be helpful just to your career, but to society.”

Szafran included a special acknowledgement to the graduates who were essential employees, healthcare workers or volunteers during the past year. 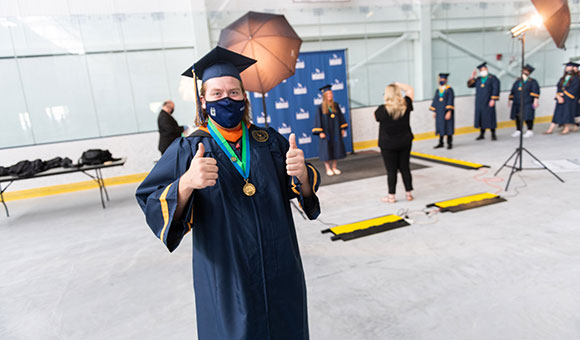 Joshua E. Godbout of Lisbon gives a double thumbs up after having his portrait taken at SUNY Canton’s Commencement ceremony, held May 15, 2021. Godbout is a Mechanical Engineering Technology major.

He then introduced two recipients of the outstanding graduate awards: Kaitlyn N. Trusty, a Civil and Environmental Engineering Technology major from Blauvelt, and Justin Omaga, a Liberal Arts major from Winnipeg, Canada. Benjamin E. Muckey, a Law Enforcement Leadership major from Oswego, was recognized as the recipient of the David R. Maynard Student Activities Award. 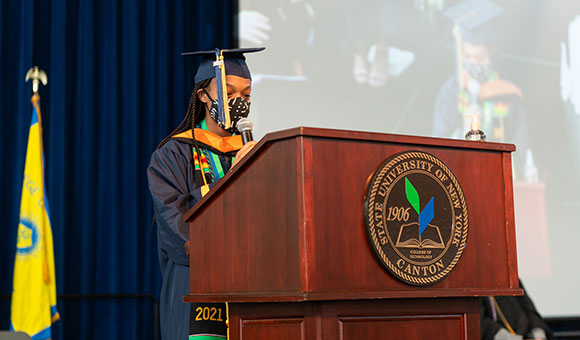 Kaitlyn N. Trusty, a Civil and Environmental Engineering Technology major, was recognized as the Outstanding Graduate at the Baccalaureate Level and addressed her fellow graduates during SUNY Canton’s Commencement.

In the senior class address, Sidei Clouden, a Veterinary Technology major from Brooklyn, said it was an honor to serve as the Student Government Association President for the past year and urged her fellow graduates to reflect on their time at the college.“Take the memories and lessons learned along the way through your life,” Clouden said. “They will serve as a source of laughter and tools to maneuver through the struggles of adulting.” 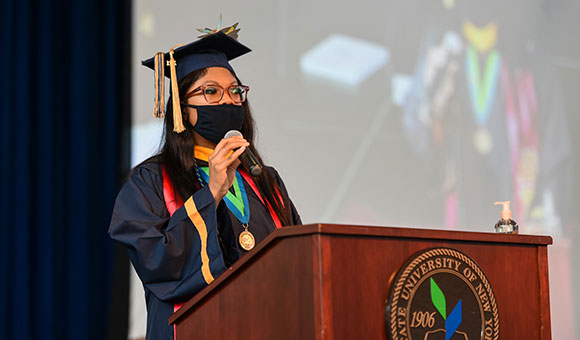 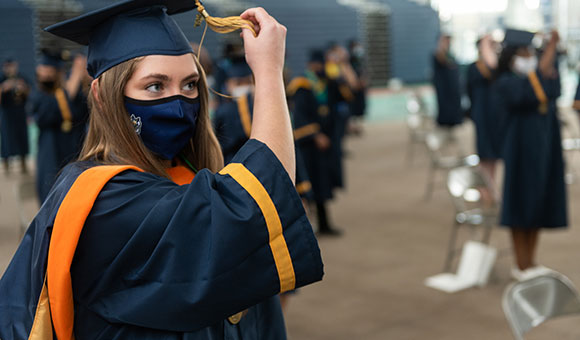 Sydney Uthe, a SUNY Canton Criminal Justice: Law Enforcement Leadership graduate from Rochester, switches her tassel from the right side of her hat to the left, signifying that she has completed her degree.

Additionally, graduates from the college’s one and two-year Nursing programs were recognized at special pinning ceremonies held earlier in the week. 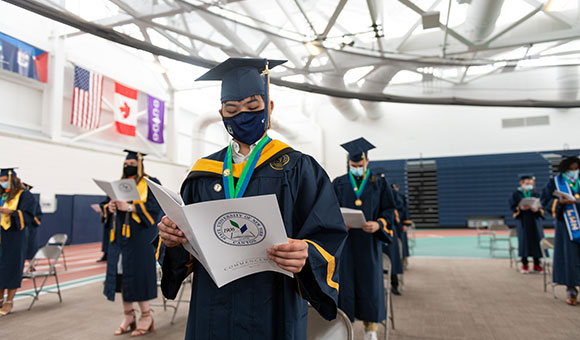 Jacob Miller of Clifton Park sings along to the SUNY Canton Alma Mater at the conclusion of the college’s 113th Commencement Ceremony celebrating the graduating class of 2021.

A recording of the event, as well as a special commencement video, can be found on the 2021 Commencement webpage.

A student holds up his diploma in victory while faculty look on from the processional line.