Intensive trainings prepare officers to handle their careers with integrity.

Over the summer, two classes of cadets graduated from the SUNY Canton Corrections academy, which is a collaborative training effort sponsored by the college, the St. Lawrence County Sheriff’s Office and the New York State Division of Criminal Justice Services.

“As corrections officers, you serve as the core of the criminal justice system,” said St. Lawrence County Sheriff Brooks J. Bigwarfe, citing an adage originally said by his predecessor, retired sheriff Kevin M. Wells. “Your professionalism and dedication to maintaining public safety ensures inmates have an opportunity for successful re-entry into our communities.”

Bigwarfe noted that the graduating classes of cadets exemplify the core values of corrections officers, including service to the community, reverence for the law, respect for all people, and integrity.

The six-week intensive and often grueling academy training is primarily led by Corporal Rodney G. Votra, programs director and training coordinator for the St. Lawrence County Sheriff’s Office. “The cadets came to the academy with a determination for success in the career of law enforcement,” Votra said. “They bond and work together as a group while working hard to prove themselves worthy of the badge.”

Professor Elizabeth A. Brown, Ph.D., who teaches in the college’s Criminal Investigation program and oversees the CJIC, addressed the cadets at the conclusion of the academy. “We are so proud of your hard work,” she said. “We applaud your enthusiasm to embark on a career in the law enforcement field.”

Among the 2021 graduates of both sections of the SUNY Canton Corrections Academy were cadets from two different counties who were beginning careers with their sponsoring agencies.

From the St. Lawrence County Sheriff’s Office were:

From the Franklin County Sheriff’s Office were:

Criminal Investigations major Brooke F. LaBarr of Parishville, graduated alongside the officers starting their careers. LaBarr received a most improved award during the academy graduation ceremony. Students are allowed to enroll for college credit as part of their degree programs. 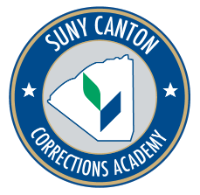