As of March 31, the Roos Esports teams have a combined 125 wins during the spring 2021 semester.

SUNY Canton esports teams will be entering the playoffs in the Eastern College Athletic Conference (ECAC) and SUNY Esports League.

Following a victory over Rensselaer Polytechnic Institute (RPI), SUNY Canton’s Overwatch A Team is the first seed and the highest ranked of the 58 teams in the ECAC, according to Esports Coordinator and Head Coach Charles W. Murray. 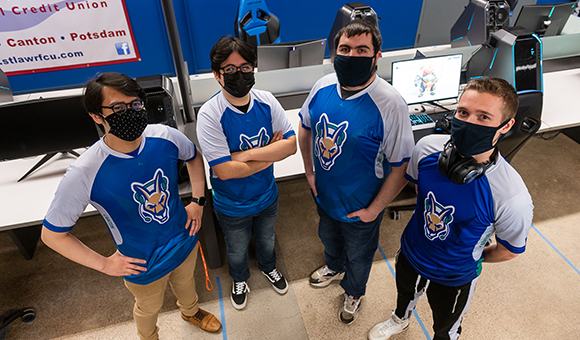 Pictured are the on-campus members of the SUNY Canton Overwatch A Team (l to r) My Dang of Syracuse, Bryan Hurtado of Brooklyn, Kal-El Key of Ridge, and Shane Girard of Phoenix. Not pictured and competing remotely are Emily Oeser of Palatine Bridge and Nathaniel French of Potsdam.

“It was the first time in three years that we’ve beaten RPI during ECAC play,” Murray said. “Our players are beyond elated with their victory. We are currently ranked first in both the ECAC and in SUNY Esports.”

Overwatch is one of the most popular games in the esports program, with two teams competing. The Overwatch B team is ranked 37th out of 58 in the ECAC and 6th of 19 in the SUNY Esports.

The college’s League of Legends teams posted their single best seasons in the ECAC since the program began. Team A finished the College League of Legends season strong, posting four wins and one loss. Each match is comprised of three full games, with Team A winning eight of 10, before finishing 5th out of 25 teams. They competed well all season but ultimately lost in the ECAC playoffs to the College of St. Rose. 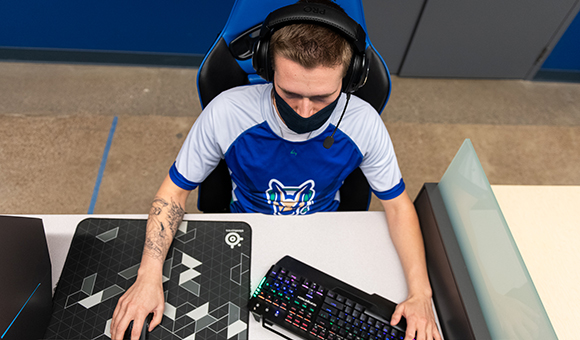 “We ended the regular season with the third highest in-game statistics in the ECAC,” said League of Legends Coach and Student Conduct Officer Mark R. Avery. “We still have two weeks until competing in a tournament hosted by Caldwell University and we’ll be entering in the community invitational held exclusively for SUNY colleges.”

During the regular season, the A Team posted a record of 10-3.

Similar to Overwatch, there are two primary teams competing in league play. League of Legends B Team’s regular season record is 6-2.