“These students have made incredible leaps in applying programing insights and understanding the complex intricacies specific to the modern professional game development industry,” said Ryan S. Hewer, an adjunct instructor in the program who oversees the class. “As an educator, there’s nothing more inspiring than seeing students work efficiently and productively identifying how they can improve their games.” 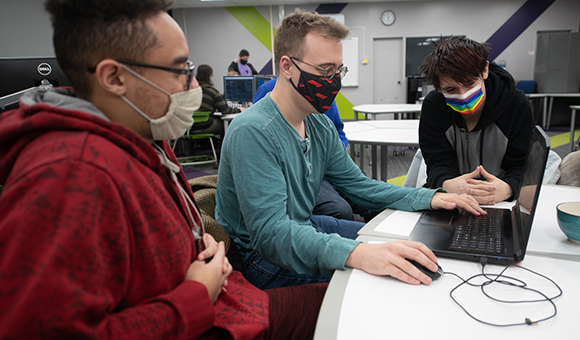 About 22 students in the class broke off into two teams with the goal of creating a video game from concept to prototype. Hewer explained that the students were tasked with creating at least one level of their creations that could serve as a vertical slice or proof of concept for future development.

Brandon E. Rivera of New York City was serving as the project lead for the team of 11 students building a fast-paced first-person shooter with the working title of “Displaced.” It combines elements of both ranged and melee (hand-to-hand) combat. During the class, the students all huddled around a shared workspace with a laptop and a sketch pad discussing the next steps in the game’s evolution. 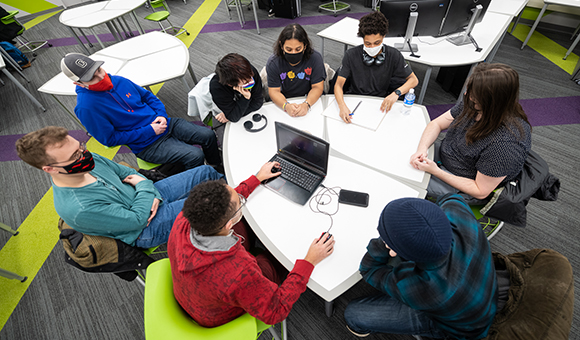 “The game has a steampunk type of style,” Rivera said, explaining that the player can switch between an animated gun and an axe. “The gun uses steam for ammunition. When you shoot enemies in the game, you get your health back. When you switch to the axe you take more damage, but your reward for defeating enemies in melee is steam to power your weapon.”

The trade-offs are what makes it so uniquely original. “It is a balance between working with your health and your ammunition,” Rivera said.

The students on the Displaced team said the first part of the game was about 90% complete as they took turns testing the first level. In the foreground, a figure is shown navigating a complex three-dimensional landscape. Christian Hardy of Adams, one of the students responsible for a portion of the extensive computer code that makes the game playable, noted “If I mess up, it really affects the game.”

In a nearby corner of the college’s Digital Studio, which serves as the game design laboratory, another group of students play through the first level of a two-dimensional “roguelike” or dungeon-crawler game called “You are the Hunted.” Their unique creation has a twist on the genre.

“Unlike most roguelikes where you are trying to find the boss and gather loot, you have to run away from the boss who’s initially stronger than you,” said Tyler Johnson of Auburn. “When we decided to make a game like this, we tried to think of what we could do that we hadn’t seen before.” 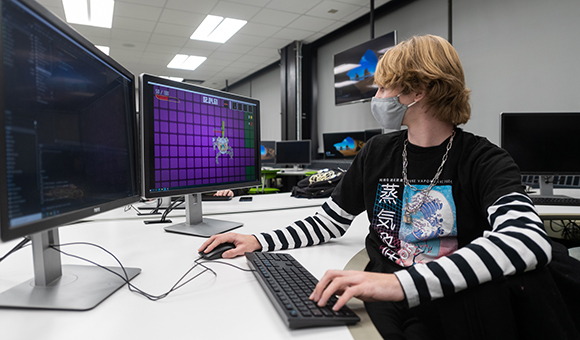 Students were still working on bright pink and green background art for the level, but the characters were completely rendered. Paul M. Riggio of Warwick demonstrated the game mechanics for the team of designers. The main character swung a sword and inflicted damage to a multi-armed robotic enemy each time Riggio clicked the mouse. “The layout will change every single time you open up the game. Each of the rooms, the way they connect, will always be randomized,” he said.

Riggio oversees the art team for the group. He built the backgrounds and did the animation on the players for the game, according to Zachary Samalot of Port Jarvis. Samalot serves as project lead for the enthusiastic and hyper-focused team members.

“We’ve been pulling for the past few months to get the game to a state where we could play through it,” Samalot said. “I’m more than happy with our progress so far.”

The project lead explained that the team was constantly thinking how they could make the game original. “Whether it’s combining two things that have been done before, or just trying a completely new spin on it, trying to bring something new to the table for the industry is always on our minds,” Samalot said.