One of SUNY Canton’s most prolific researchers is championing children’s online privacy by seeking to educate parents.

“Evidence exists that a considerable number of users are either unaware of the side-effects of sharing personal information online or lack adequate knowledge about their rights or means concerning protecting their privacy,” said Associate Professor Kambiz Ghazinour. “This becomes even more disturbing when we realize the vulnerability of children’s information in social media environments.” 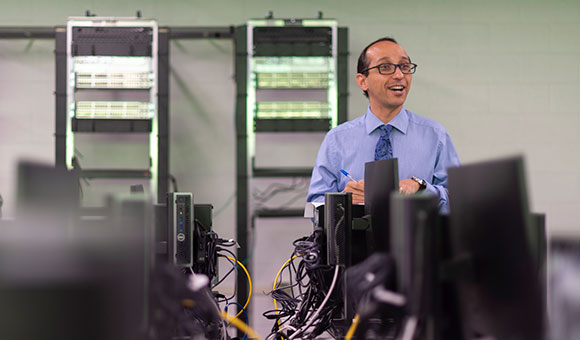 Ghazinour is the coauthor on a paper titled “Children’s Online Privacy from Parents’ Perspective.” The initial findings demonstrate that although parents and guardians might have a certain level of knowledge about the importance of confidentiality, some of their online actions still violate their children’s privacy.

The two-phase study, cowritten by Paweena Manotipya of Kent State University, includes a survey to understand parents’ perceptions of children’s online privacy. It also employs game-based learning in an attempt to educate parents when sharing their children’s information online.

In 2019, Ghazinour was hired to augment the college’s new four-year Cybersecurity program. A mere two years later, he’s earned his first promotion within the School of Science Health and Criminal Justice.

Ghazinour currently has more than 60 peer-reviewed publications and has completed 18 presentations. Shortly after he was hired, he was named a co-investigator for a $2.47 million grant, and he’s opened The Advanced Information Security and Privacy research lab on campus. These are steps in his plan toward a larger end goal.

“In the future, I would like to see our Cybersecurity program to be a top teaching and research program in New York State and nationwide,” he said.

Ghazinour is currently working on several projects, including a privacy aware smart video surveillance system, a privacy preserving “internet of things” network, and autonomous secure drone technology. He said that his position at Canton has allowed him to pursue these topics, many of which he discusses in his courses.

“I’m amazed by how supporting our faculty and staff are towards each other and the students,” he said.

The newly promoted faculty member currently resides with his family in West Potsdam. A Persian-Canadian immigrant, he earned his Ph.D. from the University of Calgary in 2012 and completed his post-doctorate fellowship at the University of Ottawa in 2014.