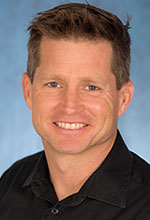 An author and director of the SUNY Canton Living Writers Series has been recognized for sharing his love of the written word.

Phil K. LaMarche, an associate professor who teaches English in the School of Business and Liberal Arts, received the SUNY Chancellor’s Award for Excellence in Teaching. LaMarche’s colleagues said he is a gifted author with boundless creativity who has influenced future generations of aspiring writers.

As the faculty member responsible for the highly successful Living Writers Series, which introduces authors to the Canton community, LaMarche received a nomination for the award from noted American author and MacArthur Fellow George Saunders.

“Phil’s excellence as a writer is, I think, related to this excellence as a teacher,” Saunders said. “It is a pleasure to dispense with the usual measured hyperbole and simply say that Phil is one of the most wildly talented writers in America.”

Saunders met LaMarche while the SUNY Canton faculty member was enrolled in Syracuse University’s Master of Fine Arts in Creative Writing program. He lauded LaMarche’s first novel “American Youth” as creating a sensation with its taut, lean, lyrical voice and its wise insights into the human condition. 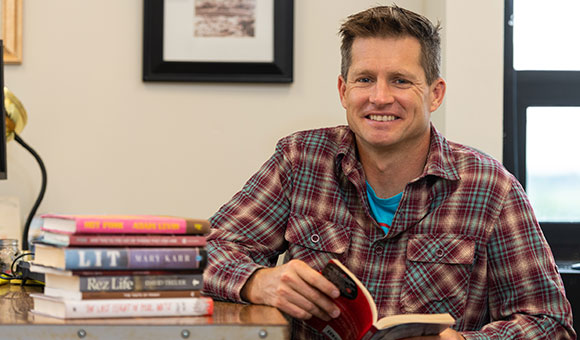 LaMarche has published more than 10 works of fiction and six non-fiction pieces.

In 2012, LaMarche established the Living Writers Series in conjunction with the college’s ENGL 264 course. In 2019, North Country Public Radio (NCPR) Station Manager Mitch Teich developed a connection with LaMarche through planning and coordinating the series.

“Phil has done an amazing service to his students and the community at-large,” Teich said. “By introducing works from a variety of creative writing disciplines, studying them, and then bringing the writers to Canton, students are able to engage with writing as a living, breathing art form.”

The Living Writers Series allows students to directly interact with the authors of the material they are learning. Much of the advanced subject matter is topical, and relates to race, gender, social and political landscapes. Most recently, LaMarche has been seeking out authors who are linked with the college’s signature hands-on programming and diversity initiatives.

“Phil challenges his students while also providing them with the support and tools they need to rise to that challenge,” said Philip T. Neisser, dean of the School of Business and Liberal Arts. “He inspires his students with his passion for the written word and shows them ways the course material connects to their lives.”

The Chancellor's Awards for Excellence are SUNY System-level honors conferred to acknowledge and provide recognition for consistently superior professional achievement and to encourage the ongoing pursuit of excellence.

LaMarche resides in Canton with his wife Carol, who is the head women’s volleyball coach at Clarkson University, Potsdam. She previously held the same position at SUNY Canton. They have two children, Wyatt, and Colette.