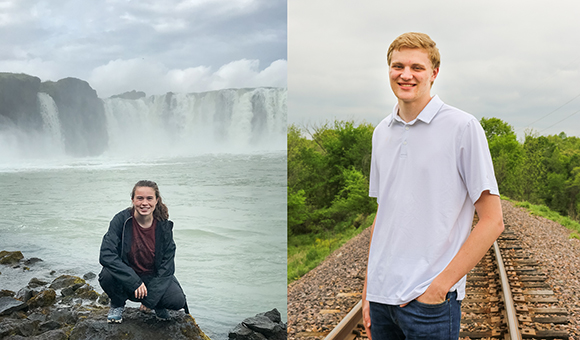 Pictured (l to r) are SUNY Canton Mechanical Engineering Technology majors Sara O’Duffy and Andrew P. Fitch, the 2021 recipients of the SUNY Chancellor’s Award for Student Excellence. Both scholars were student-athletes for the SUNY Canton Kangaroos.

“Our students have sacrificed so much over the last 13 months,” Chancellor Malatras said in a news release.  “Now more than ever, it is imperative that we mark the milestones and celebrate the brilliance, vision, resilience, and community stewardship of SUNY’s best and brightest. Undeterred by the challenges of a once-in-a-generation health crisis, they have all overcome significant odds to pursue their academic passions, become campus and community leaders, help and inspire others, and foster a better world for us all.”

Andrew P. Fitch was born in Manitoba, Canada, and came to SUNY Canton from Melbourne, Australia. He has been on the President’s List every semester for the past four years and has previously received the Chancellor’s Scholar-Athlete Award and the Outstanding Graduate Award at the associate degree level.

He was inducted as a member of Phi Theta Kappa, Tau Alpha Pi, and Golden Key honor societies. In addition to being named to the North Atlantic Conference’s (NAC) All-Academic Team for the past three years, he received the College Sports Information Directors of America Academic All-District Award and the National Association of Basketball Coaches Team Academic Excellence award.

The 7-foot, 1-inch-tall forward’s collegiate career statistics for the Kangaroos include 641 points, 649 rebounds, 266 blocks, 50 assists, and 33 steals. He holds SUNY Canton’s program records in the NCAA Division III era for career and single season blocks. He was named NAC Defensive Player of the Year during the 2018- 2019 and 2019-2020 seasons. He was also named the NAC’s 2020-2021 Men’s Basketball Senior Scholar Athlete and received First Team All-Conference Honors.

Over the last four years, Fitch has immersed himself in the campus and its culture. He was a resident assistant, tutor and student ambassador for the college’s Office of Admissions, among several other volunteer posts. He earned the Dean of Students’ Leaders of Tomorrow Award.

“My positions on campus have all given me opportunities to grow as a student leader,” Fitch said. “During the pandemic, I worked to reach out and connect peers to the resources and support available on campus and online.”

Fitch’s current plans are to continue his education in engineering at Clarkson University, Potsdam and is looking to stay in the north country.

Sara O’Duffy hails from Lakeville and maintained President’s List Honors from 2017 to Fall 2020. She was a recipient of the American Society of Civil Engineers (ASCE) Annual Scholarship, the Gladys Kennedy Endowed Scholarship and the Joyce A. MacArthur/CTC Women Endowed Scholarship.

She was actively involved in the ASCE Club, the Student Steel Bridge Team, Society of Women Engineers, Outdoor Adventure Club and Habitat for Humanity, and held leadership positions in several of those student organizations. She was also a student ambassador and worked in the college’s Ready Center. She was a recipient of the Dean of Students’ Leaders of Tomorrow Award.

O'Duffy competed on the Roos women’s cross-country team during her junior year. She led the Roos in all of the season’s five races. Her best performance of the season was when she averaged an 8-minute mile over a 6-kilometer course at the NCAA New England Regionals on November 16, 2019.

In the summer of 2019, O’Duffy embarked on a study-abroad opportunity in Iceland, where she researched the feasibility of integrating more electric vehicles to help the green, sustainable country continue to thrive.

“Because Iceland is such a small country, it is relatively easy to implement a nationwide car charging system, as opposed to the U.S. where it would be much more difficult,” she said. “I experienced a new culture by going on this trip abroad while also exploring the Icelandic hydro-electric, geothermal, and wind plants.”

Her summer abroad set her on track to graduate a semester early and start a career she secured through an on-campus career fair. O’Duffy is currently employed with TRC, a company that helps electric utilities maintain their infrastructure.