Assistant Professor Kelly R. Peterson was interviewed by Arrow Media as an expert associated with a 2013 case about a missing person that led to a murder investigation, in St. Paul, Minn. Her interviews are now scheduled to become available starting Wednesday, Dec. 22, on Discovery’s streaming service, Discovery+. The show will then be broadcast at 10 p.m. EST, Wednesday, Dec. 29 on the Investigation Discovery channel. 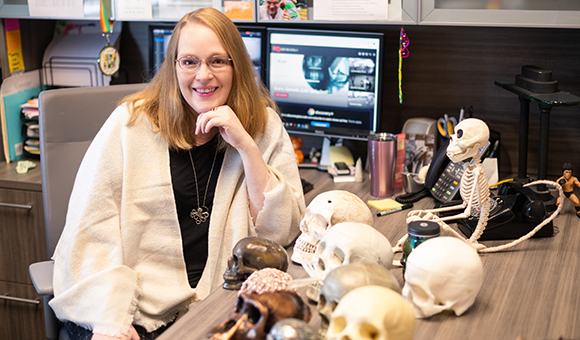 Peterson didn’t want to give away any spoilers prior to the show’s release, but said it was an interesting case.

“I use this case in my class as an example,” she said. “Students really remember concepts better when they see real-world scenarios.”

According to the production company, the documentary includes personal accounts, police interviews, home video footage, CCTV footage, material supplied by the police, including crime scene photos, and dramatic reconstructions of the events that led to a murder and of the police investigation.

Peterson was a criminalist with the St. Paul Police Video Management Unit with more than 14 years of experience. She is highly adept at forensic video examination. She was responsible for collecting video footage and then analyzing it, sometimes frame-by-frame. “Because the evidence is video, you get to see the actual recordings that drove the case during the TV show,” Peterson said.

This is not the first time a crime that Peterson worked on has been highlighted on national television. “My cases have been on ‘First 48,’ ‘Ice Cold Killers,’ ‘Forensic Files,’ and ‘Gangland’,” she said.

“Kelly is one of our uniquely talented faculty members who can draw from their extensive professional experience and apply that knowledge to their classroom lessons,” said SUNY Canton President Zvi Szafran.

Peterson teaches in the SUNY Canton Center for Criminal Justice, Intelligence and Cybersecurity, which is in the newly renovated Dana Hall building. As one of the college’s signature four-year applied educational offerings, Criminal Investigation allows students to learn everything from fingerprint collection to blood spatter analysis, with a focus on preparing them for careers in law enforcement or as crime scene investigators.