A retired chemistry faculty member who championed sustainability at SUNY Canton will be recognized during the college’s annual Honors Convocation Celebration.

“I’m pleased to announce the Professor Emeritus Brian Washburn Honors Convocation will be held April 28,” said SUNY Canton Provost and Vice President for Academic Affairs Peggy A. De Cooke. “We will be virtually recognizing hundreds of students for their academic accomplishments and honoring Professor Washburn’s extensive service and commitment to SUNY Canton.” 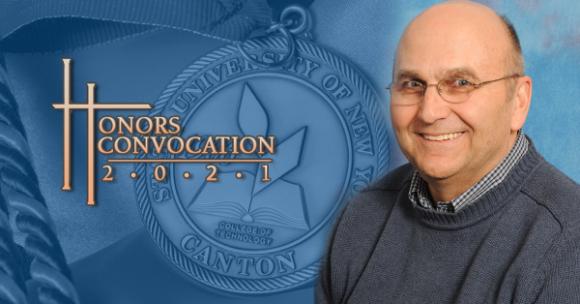 Washburn brought credit to SUNY Canton through his service as a professor in the science department and extended studies offerings, a department chair, a Middle States accreditation chair, a curriculum coordinator, the faculty liaison to SUNY Upstate Medical University, numerous faculty committees, and administrative assignments.

Among his many and notable career successes, Washburn created the exceptionally popular environmental science courses for non-science majors. The courses’ dynamic content emphasized environmental concerns using the campus and surrounding communities as a classroom. He said traditional science classes individually lacked a wholistic and unified approach to awareness of environmental issues. As someone born after WWII, he noted that his generation was responsible for contributing to the current state of the planet.

Washburn’s fundamental philosophy for his environmental science courses was based on his individual beliefs and actions. He was among the first St. Lawrence County residents to adopt geothermal energy. He has a net metered photovoltaic array that generates more electricity than the residence’s yearly electric demand and grows a significant portion of the predominately plant-based household diet. His residence’s ecological footprint is less than 25% of the U.S. average.

An early adopter of remote learning, Washburn will be right at home with the virtual ceremony. He also fully endorsed and supported the college’s online growth.

Hired in 1973 as an instructor, Washburn taught introductory chemistry courses for non-science and science, engineering technology and health majors as well as all the organic chemistry courses offered by the college. He created the environmental courses as a means of addressing the science requirements for non-science majors outside the traditional science disciplines. He also taught introductory biology and microbiology laboratory classes during his 41-year career. He was promoted to assistant professor in 1977, associate professor in 1982 and professor in 1986. He was one of the longest serving professors at the college when he retired and received emeritus status in 2014.

“I spent more than seven years with Brian during his time with Habitat for Humanity,” said former Honors Convocation namesake Professor Emeritus William J. Fassinger. “During this time, he was the affiliate’s treasurer and building site supervisor. His attention to detail and desire to assist families in need were unmatched within the organization.”

Washburn is currently the chair of the Watershed Management Committee on the St. Lawrence County Environmental Management Council. He lives with his wife, Karen, at their environmentally friendly and energy-efficient home in Canton.