The David Sullivan – St. Lawrence County Law Enforcement Academy at SUNY Canton is in full swing with 22 cadets enrolled in its spring training.

“My father was a Port Authority detective,” she said. “From everything he told me about it, I decided that it’s definitely what I would like to be doing.” 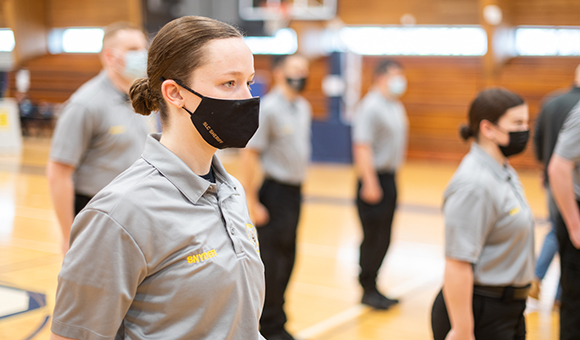 Snyder originally came to the North Country to study biology at nearby St. Lawrence University. She became involved with the college’s EMS program and is a first responder for Canton Fire and Rescue. She was introduced to St. Lawrence County Sheriff Brooks J. Bigwarfe and took the Civil Service Examination with hopes of joining the force. “Luckily, they also wanted me, so everything worked out perfectly on my end,” Snyder said.

She mentioned being a little nervous during the first week but has since begun forming strong bonds with the other cadets. “I’ve never had this kind of group training before,” Snyder said. “It’s really interesting to see how close we’re getting. It’s kind of like a team sport, but there’s even a little bit more to it than that.”

Snyder is one of six cadets hired by the St. Lawrence County Sheriff’s Office currently in the academy.

Daily exercises begin at 6:30 a.m. with physical fitness training in the Roos House Convocation, Athletic and Recreation Center, which includes running and other strength and conditioning exercises. At 8:15 a.m., the cadets move to Dana Hall for inspection. They then spend most of their days in class learning criminal process and procedure, lifesaving techniques and all the other stringent coursework necessary to become a police officer.

Zachary S. Grenier, who is originally from Ogdensburg, enrolled in the academy as a pre-employment student using his GI Bill benefits. The arrangement allows him, and three other cadets, to participate without a sponsoring police department. Many times, area agencies will hire pre-employment participants as they complete the first phase of their training. 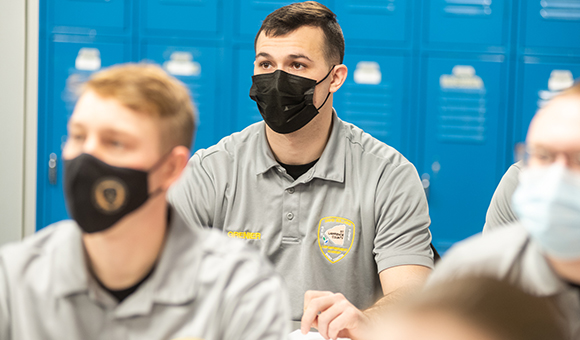 Grenier served in the U.S. Army for six years before relocating to Jefferson County with his family. While he was transitioning to a reserve position, he received firefighter training and joined the Philadelphia Volunteer Fire Department.

“As I was doing my EMT training and getting used to the area, I decided that I wanted to do something else to serve the community,” he said. “It was something I kind of grew into.”

Grenier noted the rigor of the training and said it challenges him daily.

“There’s a lot of information coming at you at about 90 miles an hour,” he said. “You have to be a sponge. You have to soak it all up as its coming because it’s coming quick.”

The trainings are punctuated by hands-on arrest tactics and de-escalation scenarios. “The Academy will challenge you both mentally and definitely physically,” he said.

About the Law Enforcement Academy

Hosted at SUNY Canton, the St. Lawrence County-David Sullivan Law Enforcement Academy is sponsored by the St. Lawrence County Sheriff’s Office and offered through the college’s Center for Criminal Justice, Intelligence and Cybersecurity. The New York State Basic Course for Police Officers has been offered locally since 1996. The academy is accredited by the New York State Bureau for Municipal Police and is one of six in the state to be approved by the Department of Criminal Justice Services, Office of Public Safety. It is named in honor of the late Canton Village Police Chief, David Sullivan. His family remains active with the academy.