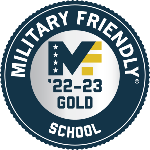 SUNY Canton has been selected to receive one of the highest designations on the annual Military Friendly® school rankings.

The college earned a Gold status on the 2022-2023 list, which was released this week. Of the 665 schools that were included, 282 earned this prestigious standing.

“Not only has SUNY Canton been on the Military Friendly® list for 11 consecutive years, but we’re proud to have earned one of their top awards,” said SUNY Canton President Zvi Szafran. “This ranking reflects our dedication to assisting service members, veterans and their families reach their educational goals.”

“The process was less stressful because of the credits the college granted me for my military experience, as well as the diligent work by Patrick Massaro to keep me aware of deadlines that were required to enroll,” Weeks said.

Among other benefits, SUNY Canton waives enrollment fees for all active duty, National Guard, reserve and veteran students. The Raymond G. Modell Veterans Lounge and Battle Buddy Center offers a space on campus where students can socialize and study. In addition to this ranking, the college also received its highest-ever score in Military Times magazine’s “Best for Vets” issue, earning third in the nation on the Career and Technical College list.