SUNY Canton Library Director Cori Wilhelm has been appointed to a new role in SUNY Administration.

SUNY has named Wilhelm as program manager for the Office of Library and Information Services. Her duties will include working with all SUNY libraries to increase the availability of openly licensed, low- or no-cost textbooks, often referred to as open educational resources (OERs), and other digital learning tools. She began her new position in early January.

She was selected because of her collaborative work with faculty to help increase OERs at SUNY Canton, which has saved students more than $1 million over a three-year period. 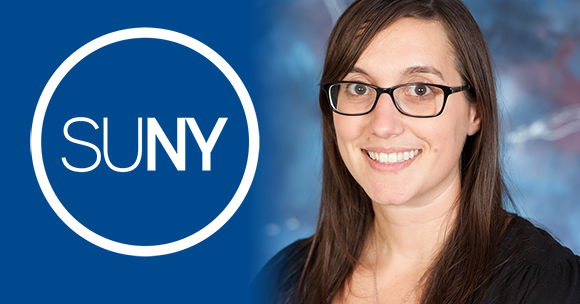 “Textbook costs are often a barrier to education, and I believe we have an obligation to reduce those barriers,” she said. “And when we talk with students about the impact of OERs, what we find is that the money they are able to save on books can be applied to essentials like rent, food and gas.”

She added that in addition to accelerating the demand for free textbooks, the pandemic has created a fundamental shift in teaching and learning, which requires colleges to make learning materials more accessible and affordable.

“Students are savvy,” she said. “They will seek out colleges that have adopted the most cost-effective materials to accompany their courses. Adopting OERs keeps us competitive.”

“Canton is such a tight-knit community, and I will definitely miss the people,” she said. “The college has earned a reputation within SUNY as an institution that is focused on student needs, and I am proud to have been a part of it.”