A retired faculty member and author from SUNY Canton’s School of Business and Liberal Arts has been selected as the 2022 Honors Convocation namesake.

“I am pleased to announce that Honors Convocation has been named for Associate Professor Emerita Dr. Cindy L. Daniels,” said SUNY Canton Provost Peggy A. De Cooke. “Dr. Daniels serves as an inspiration as an author, alumna and a lifelong student.” 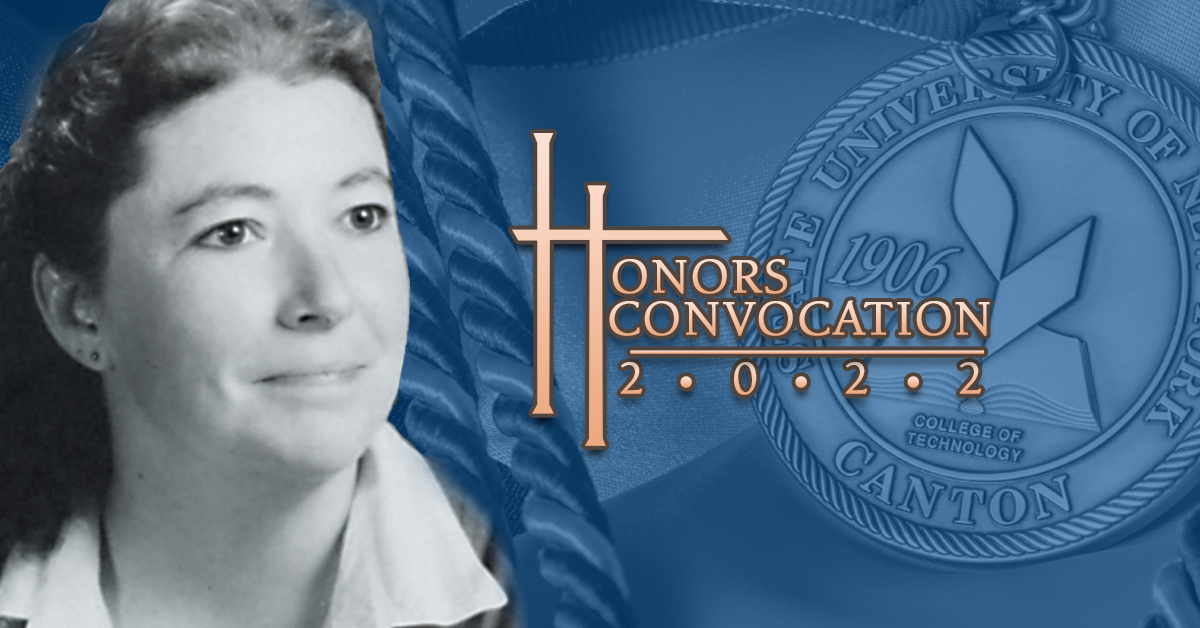 The Cindy L. Daniels Honors Convocation will be held 4:30 p.m. Wednesday, April 27, in Roos House, Convocation, Athletic and Recreation Center. The event pays tribute to the best and brightest students at the college. Daniels will be both a guest and will provide words of advice for the students.

Kirk K. Jones, Ph.D., interim dean of the School of Business and Liberal Arts, took classes from Daniels while he was a student working toward his associate degree.

“I knew Dr. Daniels as a professor with limitless capacity for sparking enthusiasm in creative writing,” Jones said. “Years later, she became my boss. In that role, she helped build my foundation of skills in pedagogy. As the years rolled by, I also knew Cindy as a fellow writer, an editor, and a friend. Her ability to encourage growth in students and colleagues alike is unparalleled.”

Daniels started as a non-traditional learner at SUNY Canton. In 1992, she graduated with her Associate in Applied Sciences in Computer Information Systems, a precursor to the college’s four-year Information Technology degree. She went on to earn her Bachelor of Arts in English and Writing in 1995 and her Master of Education in 1996 from St. Lawrence University. She also earned a Master of Fine Arts in Creative Writing from the Vermont College of Norwich University in 1997 and then earned her doctorate from Union Institute University in Interdisciplinary Studies with a concentration in American Literature

“All I really wanted was to be a full-time student,” Daniels said. “I loved the SUNY Canton experience. It’s a totally different atmosphere than any other college. It changed my life.”

Daniels began her career as an adjunct instructor in 1996 teaching English courses. She also worked at SUNY Potsdam. SUNY Canton hired her as an Assistant Professor in 2002. She was promoted to Associate Professor in 2006 and served as chair of the Humanities Department. Dr. Daniels retired and received emeritus status in 2011.

Widely heralded as a phenomenal mentor who always saw the best in people, Daniels worked with peer faculty members, Professor Emerita Nadine Jennings and Professors Christopher Sweeney and Matthew Burnett to help launch the college’s successful Graphic and Multimedia Design four-year program. She worked as the editor and faculty lead for the college’s Grasse Roots Literary Magazine, which encouraged students to develop their own literary voices.

“My biggest contribution to the college were the courses I developed and the connections I made with students,” Daniels said. “I feel truly honored to have been selected for this acknowledgement.”

Her literary career includes 18 published short works, and the coming-of-age novel “Mirrors of Water,” published in 2013.

Daniels lives in Morley with her husband, Alfred. They have two children, Jay, and Julie, and three granddaughters, Madelynn, Rhianah, and Kaidence.