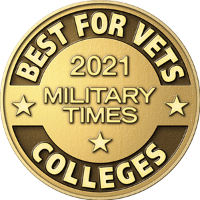 Military Times magazine has given SUNY Canton its highest ranking ever in the publication’s annual “Best for Vets” issue.

The college was ranked third in the nation in the Career and Technical College category, advancing 11 spots from 14th in 2020. SUNY Canton was the only institution in New York to make the list.

“I have received continuous support from SUNY Canton administrators, educators and especially Mr. Massaro,” said Shane M. Moyer, an Army reservist and Industrial Technology Management student from Rutland, Vt., who resides in Ogdensburg. “As a military student, professors and staff have been understanding of absences for military training and are willing to make accommodations to ensure I do not fall behind on coursework.”

Moyer, who will graduate later this summer, also said he enjoyed using the Raymond G. Modell Veterans Lounge and Battle Buddy Center as a space where he could share experiences and network with other students. Modell, a 1962 graduate of the college, enrolled through the GI Bill after his Air Force service.

The college is perennially recognized for its military-friendly culture, and was also named a top school for veterans by Viqtory Media for the 10th consecutive year.

For more information on the rankings and to read the entire list, visit Military Times.