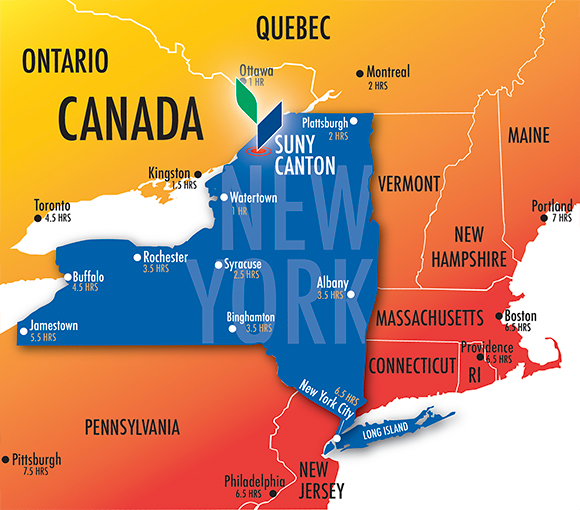 Take NYS Thruway (I-90) west to Utica, follow directions from Utica. About 4 hours.

Departing Ottawa Airport turn left onto Uplands Drive. At intersection for Hunt Club Road turn left. Follow Hunt Club until exit at Prince of Wales Drive. Take exit for Highway 416 which will turn into Highway 16 before reaching the border. You will then cross the bridge and go through United States Customs.

After crossing the bridge you will come to a "T" in the road. Turn right and proceed about 2 miles. You will go through two traffic lights and at the third traffic light turn left on to Route 68. A car dealership is at this intersection.

Follow Route 68 Canton-Ogdensburg Road straight into Canton. The College is on your left.

Both Trailways and Greyhound have pick-ups and drop-offs at SUNY Canton.

Greyhound also operates a number of locations in New York and services SUNY Canton. For times and prices visit the Greyhound website.

For more information and flight times, go to the OGS Air website.

Amtrak does not have a station near SUNY Canton. Travelers will need to find additional transportation from Plattsburgh, Albany, or Syracuse to the campus.

For more information on ticket prices and departure times, go to the Amtrak website.

How to Apply
Academics
Finances