Likens was first diagnosed with Asperger’s Syndrome at the age of 20 following a childhood filled with inexplicable behaviors. Now he presents across the country so that others can decode and understand autism spectrum disorders (ASD). 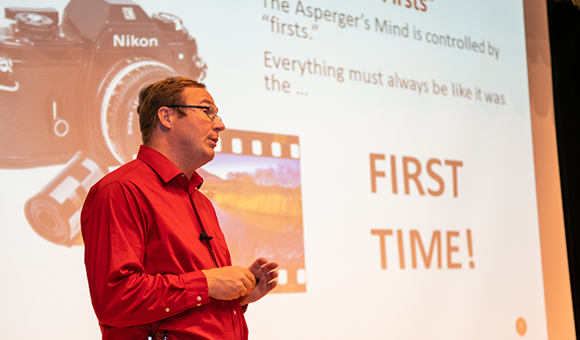 He will hold presentations at noon, 3 p.m. and 7 p.m. Wednesday, Nov. 9, in the SUNY Canton Richard W. Miller Campus Center’s Kingston Theater. All three sessions are free and open to the public. It will be the fourth time Likens has presented on campus.

“It’s crucial for police officers to understand how autistic individuals behave or react,” said Criminal Justice Lecturer Alan P. Mulkin, who began inviting Likens to SUNY Canton during his previous career as University Police chief. “Beyond police and emergency personnel, we can all learn more about spectrum disorders.”

Likens discusses growing up with undiagnosed ASD, including his intense interests in weather and auto racing. His first trip to the Indianapolis Motor Speedway was for an Indy 500 practice day in 1987, and his first Indianapolis 500 was in 1989. He was enamored with the speed, color and competition of the race cars. More than that, he was fascinated by the person in the flag stand waving the green flag to start the race and checkered flag to end it.

When he wasn’t racing, he began flagging at the age of 13 at a go-cart track in St. Louis, Mo. After working a series of Indy car races, and 22 years after first seeing a flagger, Likens became one of the people signaling the racers at the Indianapolis 500.

There has been a growing demand for public education about autism. Likens has become one of the preeminent speakers on the issue and its impact on education, law enforcement, employment and medical care. He authored the book “Finding Kansas,” about living and finding peace with this form of autism and emphasizes the need to find ways to “celebrate, not separate” those with ASD and other disabilities.

The Centers for Disease Control and Prevention estimates one in 59 American schoolchildren is on the autism spectrum. Almost half of children identified with ASD has average to above-average intellectual ability. Autistic adults make up a large and extremely diverse minority population.

Likens’ presentations are sponsored by Student Activities, Involvement and Leadership and SUNY Canton Provost Peggy A. De Cooke as part of the college’s ongoing student and community programming.