The College received notification that Dean Emerita Margaret P. Vining passed away on the evening of Wednesday, July 13, 2022.

Mrs. Vining began her career at SUNY Canton in 1968 as a Technical Assistant in the College’s Nursing program. She also held the titles of Assistant Professor; Interim Dean of the School of Allied Health, Business, and Public Administration; Director of the Nursing Program; Staff Associate; and several other designations during her career. During Mrs. Vining’s 28 years of service, the nursing program at the College thrived, and she contributed work to establish the bachelor’s degree in Healthcare Management, which has become the most popular four-year degree at the College. 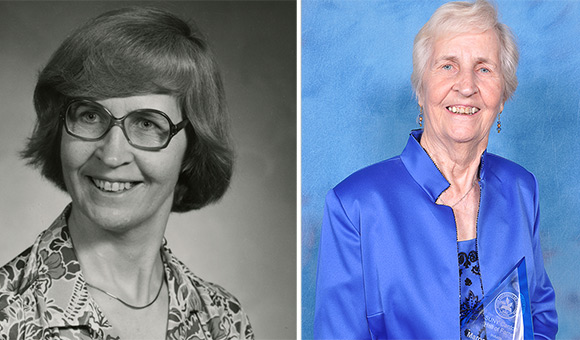 Her significant contributions to the field led to her being recognized as a recipient of the New York State Legislature’s Nurse of Distinction Award in 1991.

Mrs. Vining retired from in 1996, but she and her support continued to be recognized in numerous ways. In 2005, the College’s Honors Convocation was named in her honor, and in 2008, Mrs. Vining established the William C. Vining and Dr. Judson Vining Scholarship as a memorial tribute to her husband and her father in-law. She also donated to the Maresca Family challenge, which helped raise over $280,000 for the Nursing program, and in 2011, she was inducted as an inaugural member of the College’s Hall of Fame.

In addition to her career in education, Mrs. Vining’s professional experience included eight years in acute care. She held posts as a staff nurse at Good Samaritan Nursing Home in Watertown, staff nurse at Columbus City Hospital in Columbus, Ga., and as assistant operating room supervisor at E.J. Noble Hospital in Canton.

Mrs. Vining will be remembered fondly as a “Standard of Excellence” for her commitment, influence, generosity, and dedication to SUNY Canton. Her efforts as an educator helped establish the College as a leader producing quality nursing graduates who’ve helped improve many lives in the North Country.

She will also be remembered as an active part of the community through her roles on the Canton-Potsdam Hospital Foundation Board and the Board of Directors of the Thousand Islands Girl Scout Council and as Deacon at the Fowler Baptist Church and volunteer at the Hermon Hepburn Library.

She is survived by Tim Vining of Latham; Daniel Vining of Fletcher, N.C.; Julie Spadaccini of DeKalb Junction; and Carrie Kasurak of Hermon; seven grandchildren; and three great-grandchildren. Mrs. Spadaccini remains active as a friend of the College who has attended Alumni and Foundation events on her mother’s behalf.

A brief obituary is available online. An article celebrating her life is pending. The information included in this email was obtained through the Alumni and Foundation Office, President’s Office, Provost’s Office, Public Relations Office, and the Office of Human Resources.

Mrs. Vining’s family and Associate Provost Molly A. Mott contributed to this announcement.