The SUNY Canton Living Writers Series will resume in-person events this month when it welcomes a New York City stand-up comic who is also a SUNY Canton student.

Doug Smith will perform at 6:30 p.m. Thursday, Oct. 20 in the Kingston Theater, followed by a Q&A session. He will discuss his writing process and the mechanics of comedy. The event is free and open to the public. 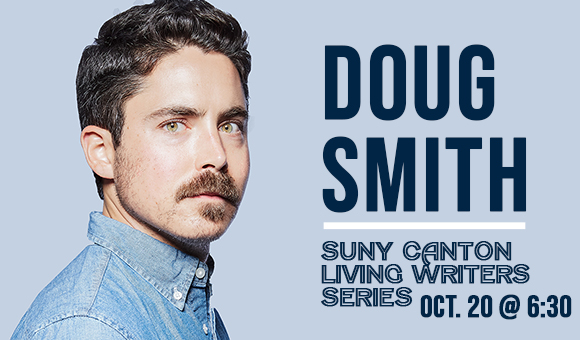 “I’m very much looking forward to performing at SUNY Canton and trying to connect with 18-22-year-olds as a man deep in the throes of a midlife crisis,” Smith joked.

“I love being able to take classes online. It’s a far cry from my days as an art student, commuting two hours each way from my hometown in Connecticut to the School of Visual Arts in Manhattan,” Smith explained. “I dropped out just shy of finishing my sophomore year, and now I’m slowly inching my way toward completing my bachelor’s degree. When I finally get to don my graduation cap, I’ll be too old and arthritic to toss it in the air.”

Smith was a stand-up comic and improv actor before receiving his TV break on “Conan” in 2016. A few years later, his appearance on Comedy Central’s “This is Not Happening” show went viral, amassing nearly 6 million views on YouTube. His first album, “Barely Regal,” was released in 2019, and he has appeared on “The Late Late Show with James Corden,” and Kevin Hart’s LOL Network.

“After having Doug in my class, I knew immediately that we had to bring him to campus,” LaMarche said. “It's an exciting turn for the Living Writers Series to host a stand-up comic, and I hope everyone comes out to share in the laughs and take part in an insightful discussion of the mechanics of comedy.”