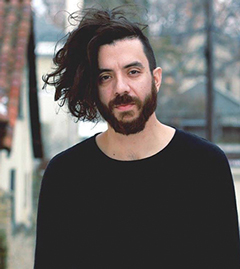 Kaveh Akbar’s poems appear in The New Yorker, Poetry, The New York Times, Paris Review, The Nation, Best American Poetry, The New Republic, The Guardian, American Poetry Review, The Poetry Review, PBS NewsHour, and elsewhere. His second full-length volume of poetry, Pilgrim Bell, will be published by Graywolf in 2021. His debut, Calling a Wolf a Wolf, is out now with Alice James in the US and Penguin in the UK. He is also the author of the chapbook, Portrait of the Alcoholic, published in 2016 by Sibling Rivalry Press. The recipient of honors including a Ruth Lilly and Dorothy Sargent Rosenberg Fellowship from the Poetry Foundation, multiple Pushcart Prizes, the Levis Reading Prize, and a Lucille Medwick Memorial Award from the Poetry Society of America, Kaveh was born in Tehran, Iran, and teaches at Purdue University and in the low residency MFA programs at Randolph College and Warren Wilson.

Kaveh founded Divedapper, a home for dialogues with the most vital voices in American poetry. With Sarah Kay and Claire Schwartz, he writes a weekly column for the Paris Review called "Poetry RX." Previously, he ran The Quirk, a for-charity print literary journal. He has also served as Poetry Editor for BOOTH and Book Reviews Editor for the Southeast Review. Along with Gabrielle Calvocoressi, francine j. harris, and Jonathan Farmer, he starred on All Up in Your Ears, a monthly poetry podcast. Kaveh is currently editing an anthology of poetry of the spirit for Penguin Classics.

Calling a Wolf a Wolf

This highly-anticipated debut boldly confronts addiction and courses the strenuous path of recovery, beginning in the wilds of the mind. Poems confront craving, control, the constant battle of alcoholism and sobriety, and the questioning of the self and its instincts within the context of this never-ending fight.

A breathtaking addition to the canon of addiction literature.
- Starred Review in Publishers Weekly

Akbar proves what books can do in his exceptional debut, which brings us along on his struggle with addiction, a dangerous comfort and soul-eating monster he addresses boldly.
- Starred Review in Library Journal

Akbar has what every poet needs: the power to make, from emotions that others have felt, memorable language that nobody has assembled before.
- Steph Burt in The Yale Review