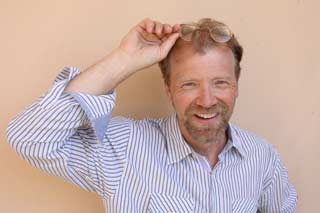 George Saunders is the author of six previous books, including the story collections CivilWarLand in Bad Decline Pastoralia, and In Persuasion Nation. He has received fellowships from the Lannan Foundation, the American Academy of Arts and Letters, and the Guggenheim Foundation. In 2006 he was awarded the Pen/Malamud Award for Excellence in the Short Story and was included in Time’s list of the 100 most influential people in the world. He teaches in the Creative Writing Program at Syracuse University. 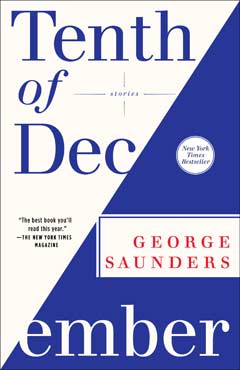 A New York Times Bestseller and widely acclaimed as one of the best works of fiction of 2013, TENTH OF DECEMBER, by George Saunders, releases in paperback on January 7.

Praise for Tenth of December

“George’s work is a stiff tonic for the vapid agony of contemporary living—great art from the greatest guy.”—Mary Karr

“One of the most gifted, wickedly entertaining story writers around. . . . Tenth of December is his fourth and best book…. exhilarating attention to language and beatific generosity of spirit.”—New York Times Book Review

“10 beautifully bent stories. . . . Reading Tenth of December is like one of those dreams when you’re in your own house, but things are strangely askew and subtly changed; you’re never quite sure where you are, and the view from the window isn’t quite what you expect it to be, but it’s exhilarating. . . . There is hope, these stories remind us; we will carry on, through the unfamiliar roads, to home.” —Seattle Times

“George Saunders’s stories in the Tenth of December are masterpieces of surrealist satire.”
—Vanity Fair

“A brilliant book from a brilliant author.”—Daily Nebraskan

“Saunders was already the funniest short-story writer working today. Tenth of December shows that he’s the most soulful one as well.”—Time magazine

“Nothing has been read its last rites more frequently than the American short story. George Saunders proves, yet again, to be the form’s one-man defibrillator.” —Harper’s magazine

"Saunders' startling, dreamlike stories leave you feeling newly awakened to the world.  Worth the hype."—People magazine

“Tenth of December shows George Saunders at his most subversive, hilarious, and emotionally piercing. Few writers can encompass that range of adjectives, but Saunders is a true original -- restlessly inventive, yet deeply humane.”—Jennifer Egan

“The title of Saunders’s fourth collection doesn’t reference any regularly observed holiday, but for the MacArthur-certified genius’s fans, a new collection, his first in six years, is a cause to celebrate.  . . . Eventually, a suspicion creeps in that, behind Saunders’s comic talents, he might be the most compassionate writer working today.”–—Publisher’s Weekly

“George Saunders — the beloved cult author known for surreal short stories about American nuttiness — is the master of joy bombs: little explosions of grin-stimulating genius that he buries throughout his deeply thoughtful, endlessly entertaining flights of imagination. His fourth story collection, Tenth of December, brims with laboriously constructed nuggets that will make you beam with unmitigated glee. . . . an irresistible mix of humor and humanity.”—Entertainment Weekly

“A book for everyone from serious students of the American short story to those folks just looking for a good read. . . . Saunders is one of the most gifted and seriously successful comic short story writers working in America today. . . . George Saunders is the real thing, the successor to such dark comedians of ordinary speech as Donald Barthelme and Grace Paley. He's a Vonnegutian in his soul and, paradoxically, a writer like no one but himself.”—Ala Cheuse, NPR All Things Considered

“It's no exaggeration to say that short story master George Saunders helped change the trajectory of American fiction. . . . Saunders's characters cling to hope as tenaciously as ever in his new collection,  set in a kind of Dark Ages middle America defined by Darwinian class striving, simulated bread-and-circus distractions (Mr. Saunders is fascinated by amusement parks and reality television) and the substitution of bureaucracy for ethics.”—Wall Street Journal

“You could take every class offered in the Oberlin liberal arts catalogue and still not get as close as Saunders does in these pages to understanding the connections among sexism, racism, post-colonialism, late-stage capitalism and white middle-class anxiety. (And you certainly wouldn’t find yourself laughing uproariously at it all.). . . . Each one of these is as funny and off-kilter and formally ingenious as you want a Saunders story to be, but each one is also something else: unabashedly tender.”—Washington Post

“Tenth of December locates a new and striking humanity.”—Time Out New York