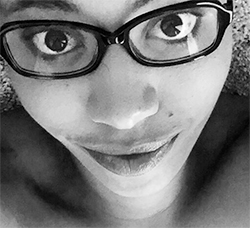 Erica Dawson is the author of two collections of poetry:  The Small Blades Hurt (Measure Press, 2014) and Big-Eyed Afraid (Waywiser Press, 2007). Her poems have appeared in Barrow Street, Birmingham Poetry Review, Blackbird, Literary Imagination, Unsplendid, Virginia Quarterly Review, and other journals. Her poems have been featured in several anthologies, including Best American Poetry 2008 and 2012, American Society: What Poets See, Living in Storms: Contemporary Poetry and the Moods of Manic-Depression, The Swallow Anthology of New American Poets. Her reviews have been featured in Florida Review, and she currently writes a freelance column, “Dark and Sinful,” for Creative Loafing Tampa.

Poetry Editor for the Tampa Review, she is also one of the editors of Mead: The Magazine of Literature and Libations, and serves on the advisory board for 32 Poems.

Born and raised in Maryland, Erica holds a BA from Johns Hopkins University, an  MFA from Ohio State University, and a PhD from University of Cincinnati.  She’s taught workshops and seminars at the Florida Arts Coalition’s Other Words Conference, St. Leo University’s Sandhill Writers Retreat, and DISQUIET International Literary Program in Lisbon.  She’ll teach there again this summer, as well as at  Poetry by the Sea: A Global Conference in Madison, CT.  An assistant professor at The University of Tampa, she teaches for the undergraduate English and Writing program and the Low-Residency MFA in Creative Writing. 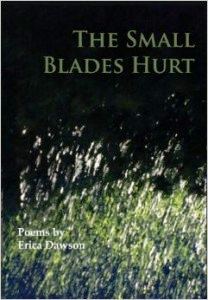 In The Small Blades Hurt, Erica Dawson picks up where her debut collection, Big-Eyed Afraid, leaves off: “The world’s outside. I’m in.” She moves from her border state Maryland to the true South, the Midwest, and back, delivering poems where a single memory can tangle with America’s collective past. Dawson finds a home in the tradition of formal poetry, carving a place all her own, whether manic and cozy in a poem with only one rhyme, or calm in a crown of sonnets’ claustrophobia. No matter the form, Dawson explores lust and love, past and present, accidents and the ache of plans gone wrong. Everything from Al Green to Abraham Lincoln is fair game. And even when the world seems to have steadied itself, The Small Blades Hurt  reminds us that we may have the tendency to lead, but “someone must slip and feel it.”